Double or Die is the third novel in the Young Bond series depicting Ian Fleming's superspy James Bond as a teenager in the 1930s. The novel, written by Charlie Higson, was released in the UK in January, 2007 by Puffin Books.

While visiting Highgate Cemetery, Professor Alexis Fairburn, a professor at Eton College, was kidnapped by two thugs for his knowledge of "Project Nemesis", but he dropped a clue on his way out of the cemetery. At the Duck Inn in Pett Bottom, James Bond was contacted by his headmaster, who informed him of the cover story for the events of Blood Fever, and told James to stay out of trouble and never to speak of what had happened to him.

Months into the school year, James was again contacted by the Headmaster regarding the disappearance of their maths professor, Alexis Fairburn. Fairburn had sent a vague notice of resignation, and a letter to Bond's messmate Pritpal Nandra, which they hoped might help them understand the situation. Pritpal read the cryptic letter, but could make nothing of it. The Headmaster then took it to his office, but by remembering a phrase from the letter, the boys realized that it was a puzzle with their first hint being from the morning crossword, which had been set by Fairburn, "Solve Seven Cryptic Clues". Bond then arranged with the school Danger Society to make a copy of the letter by spying on the Headmaster from the glass roof of his study. They then worked through two more clues and deduced that a man by the name of Gordius, an alieus used by the morning crossword setter that had replaced Fairburn.

Gordius agreed to come to the school crossword society meeting, but the man that came was less interested in crosswords than in the letter left by Fairburn. He challenged James and two other boys to a card game called Hearts, which James was able to win, much to Gordius' dismay. Before they parted company, James asked for Gordius' name, and after some thought he replied with Ivar Peterson. With this information, James began to plan a meeting with the real Professor Ivar Peterson at Cambridge. When James and Pritpal returned to Eton they were nearly run over by a skull faced man, and found that their house had had a fire after a break in, the perpetrator of which, the housekeeper swore was death itself. The boys were then transferred to Eton Mission, a church in Cambridge until the house was repaired. In Cambridge, James went to see Petersen, and waited outside of his study with a young Alan Turing. When Bond entered the study, he found Petersen murdered at his writing desk. Deducing that the murderer was in the next room, James took the letter Petersen had been writing, a paper with binary code on it, and a photograph of Fairburn, Peterson, and a third man.

Outside, James ran into Turing, whom he told to take the police to Petersen's room, but he spotted the skull faced man who had nearly run him down, and ran away. He went to the tea shop where he had arranged to meet Perry Mandeville who had driven to Cambridge with him, but Mandeville was not there. After reading the letter from Petersen, James went to his car, where he was cornered by the skull faced man and his colleague. James sped away in his car, but his pursuers did not give up. They chased him through the surrounding countryside, and James made several escape attempts to escape but to no avail. After one final attempt, by speeding past a truck that the gangsters' car could not get past. Shortly up the road however, James discovered that they were now in front of him, and fearing he had gone mad, James decided to ram them. As he got closer, the gangsters veered off the road, but shortly after, James' car hit an ice puddle which sent it skidding through the stonework of the bridge that it led to, throwing James out of the car and onto the riverbank. As he got up to observe his car it exploded, sending James tumbling back into the river. The gangsters, named Wolfgang and Ludwig Smith came down to investigate, but the flaming car's spark plug exploded and took out one of Wolfgang's ears, necessitating them to make a speedy escape. James then awoke under the bridge and began an aimless walk across the countryside. He awoke in a hospital in London, which he quickly escaped to avoid speaking to police, and got a cab to Perry Mandeville's house in Regent's Park, where they decide to track down Sir John Charnage, who was mentioned in the letter from Peterson. When they arrived at Charnage's house, they discovered that he was the man who had masqueraded as Peterson at the Crossword Club, and he tried to call the police on them, but they escaped into the street and back to Eton Mission after learning that they both were looking for Fairburn.

In their room, James and Perry deciphered the binary code with the help of Pritpal Nandra, and learned that Fairburn had been working on a Project Nemesis. They were then visited by police, who were turned away when they learned that there were no students at the Mission with James and Perry's cover names. They then decided that they must meet the deadline in the letters by acting themselves and James and Perry headed to find Egyptian tombs at Highgate Cemetery that were mentioned. When they arrived, they enlisted the aid of a tramp named Theo who led them to Nero: a statue of a lion on a ringmaster's grave where Fairburn had hidden an important letter. They then were discovered by the Smiths, whom James tricked into taking the binary code instead of the letter they wanted, and escaped with help from Theo, who was killed in the struggle. Perry and James were separated, and James got into the boot of the Smiths' car, which he believed would take him to Fairburn. They arrived at the Charnage Chemical Foundry, where James set fire to their car in order to infiltrate the factory, win which he discovered the Paradice Casino. On his way out, he briefly helped a man named Dutch Flegenheimer win back his losses before Ludwig Smith took him away to Charnage's office, where he was questioned and tortured by having lethal amounts of Gin forced down his throat as he eventually shared what he knew with Charnage to make it stop. During the torture session, James managed to solve another clue, and deduced that Charnage was working for the Russians.

James was then deemed too dangerous to be kept alive and was taken by the Smiths to the Thames to be dumped into the river. James, using a bottle of unstable potassium he had stolen from the Charnage Chemical Foundry, and set the boat on fire, causing Wolfgang to lose all of the fingers on his left hand, and he escaped in the turmoil. He was found asleep in a back alley by Kelly Kelly and her gang of street urchins, and was kept from mutilation by her elder brother Red Kelly. After telling them his story and resting at the Kelly house, James called Mandeville and Nandra, who had solved another clue and returned to Eton to see a wall painting of Sir Amoras attempting to sell his wife to the Devil, which reflected the situation of John Charnage and Colonel Irina Sedova. On learning from Red's father that there was a ship at the King George V port called the Amoras, and Kelly's reasoning that Project Nemesis would be transported by boat, the Kellys took James through the sewers to the abandoned pneumatic rail system, and Kelly and James sneaked to the docks.

They used a rowboat to get alongside the Amoras, and sneak aboard. James finds the Nemesis Device, and later finds Fairburn, whom he safely gets off the ship, but when they get back to the rowboat, they Amoras crew had noticed Fairburn's disappearance, and the three spent the night in a scrapped ocean liner next to the Amoras. In the morning they had been discovered, but fought their way to the wharf where the sailors of the Amoras were waiting for them. They prepared to surrender, but Perry Mandeville and Red Kelly had assembled a small army and they fought them off. James then decided to re-board the Amoras with Red and a few others to destroy the Nemesis machine. On board, Ludwig and Wolfgang attempted to kill James, but were both killed in gruesome ways. After Nemesis was safely destroyed, Kelly revealed to Bond that Sedova, the mastermind behind the plot to steal the Nemesis, had taken Fairburn and Mandeville through the pneumatic rail system. He and the Kellys then trailed her through the tunnels and found Perry, who helped James to get Fairburn back, but James was knocked into a fan. He landed on a narrow walkway over it, and allowed Sedova to go free.

Thirteen years later, at age 25, James drove to Site X, where decoding during the recently ended war had happened. There he ran into Alan Turing again, and met up with Fairburn, who had been on the coding team. The two ended their reunion with a discussion of how wars would be fought by machines in the near future, and James remarking that "I suppose I'm doomed to spend the rest of my life trying to sort out the problems that the clever people of the world make for the rest of us". 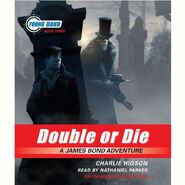