Dr. Erik Widziadlo was a Holocaust survivor turned businessman and political radical who serves as the main villain in the 1989 James Bond comic Permission to Die by eclipse comics and acme press.

Widziadlo was born in Warsaw, Poland in 1930 to a Polish father and a Czech mother. During the Holocaust, Widziadlo and his family were taken to the Treblinka concentration camp, where he was imprisoned for three years and his parents were killed. In 1949 at the age of 19, Widziadlo emigrated to Prague, Czechoslovakia where he attended university and earned degrees in Physics, Engineering, Music, and Art. Critical of the Soviet Union, in 1967 he attended the Fourth Writers Congress, where he read a letter condemning official state censorship. On August 20th, 1968 he was abducted by invading Soviet forces and interrogated. After this event he became a shut-in, and reports surfaced that he had been disfigured. In 1971 he moved to Austria, and then again to the United States, where he opened a mountain resort in Northern Idaho.

In 1989 Widziadlo enacted his endgame. Using his special satellite launch system as bait for the Secret Intelligence Service, Widziadlo had the agency extract his former student and lover, masquerading as his niece, from Hungary where she had been acting as a mole for the last ten or so years. 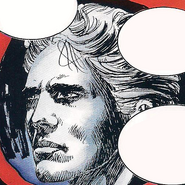 The last known picture taken of Widziadlo
Add a photo to this gallery
Retrieved from "https://jamesbond.fandom.com/wiki/Dr._Erik_Widziadlo?oldid=88133"
Community content is available under CC-BY-SA unless otherwise noted.