Dr. Katya Nadanova is a fictional nanotechnology scientist and co-conspirator with Nikolai Diavolo. A secondary antagonist in the 2004 James Bond video game Everything or Nothing, Nadanova is portrayed by German model Heidi Klum.

Nadanova, an Oxford-educated scientist has a large knowledge about nanotechnology, making her more than a little useful to her boyfriend, Diavolo. Nadanova is first mentioned in the pre-level briefing for "A Long Way Down", in which it is revealed that MI6 believes she has been kidnapped for her knowledge of nanotechnology. After the level, she is seen being forced onto a train, which Bond rescues her from. The two then commandeer a helicopter and use it to shoot down her kidnappers and return Katya to her home, where Nikolai Diavolo waited to see if her mission was successful. She replies that it was, and that all but one nanobot were destroyed. She then gives the nanobot to Diavolo.

She is later seen in "Vertigo", pushing Serena St. Germaine out of a helicopter. Bond later spots her and Diavolo leaving New Orleans. It is then revealed that Katya developed the Nanobots to repair nuclear reactors, but Diavolo had used the last of her original Nanobots to create a new one that would destroy any metal it came across, except for platinum: the material they are made of. Later, in Puerto Viejo, Peru, Katya finds Bond trespassing in a Platinum mine, and she tranquilizes him and brings him to Diavolo, and when he is finished with him, Katya sets a mining drill to burrow through him.

Oblivious to his escape, she, Diavolo, and Jaws launch their nanotech-fuelled invasion of Moscow. Once again, she discovers 007 - this time on-board a freight elevator feeding a nuclear missile silo underneath the Kremlin. Departing, she orders her men to (unsuccessfully) kill him. Katya and Diavolo then begin the launch sequence for eight Soviet ballistic missiles equipped with nanotech payloads. Bond deactivates the ICBMs, and the two attempt to flee the facility in a Russian hoverjet. As they fly through the elevator shaft, 007 downs the aircraft and its leaking nanobot payload eats through the elevator floor on which the wreckage precariously balances. Katya subsequently plummets to her death, while Diavolo ejects in time.

Nadanova kidnaps and throws Serena from a helicopter.

The antagonists prepare to launch their stolen ICBMs with nanotech warheads.

Nadanova and Diavolo trapped in the teetering wreckage of their hoverjet. 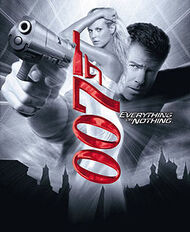 Katya on the official promotional poster for Everything or Nothing. 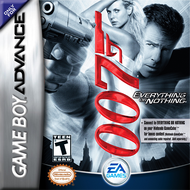 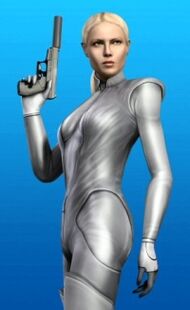 Official promotional artwork of Katya Nadanova.
Add a photo to this gallery

Retrieved from "https://jamesbond.fandom.com/wiki/Dr._Katya_Nadanova?oldid=92523"
Community content is available under CC-BY-SA unless otherwise noted.