The "Dragon" or "Dragon Tank" is a fictional flame-throwing armored vehicle (painted with dragon decals) utilised by Dr. Julius No to keep inquisitive locals away from his operations on Crab Key. The vehicle was created for the Ian Fleming's 1958 James Bond novel Dr. No and appeared in the Daily Express comic strip adaptation of the story, published between 23rd May and 1st October 1960. The vehicle was subsequently featured in the novel's 1962 film adaption.

In Ian Fleming's 1958 novel, the "dragon" was a black and gold armored tractor, initially used by Doctor No to devastate an Audubon Society bird sanctuary on Crab Key. Powered by a diesel engine, its most distinctive feature was its long metal dragon's head, which had been added to the front of the radiator.[1] Its pair of yellow headlamps had been given black centres to make 'eyes' and a long snout with gaping jaws had been added to look like a dragon's mouth.[1] Inside the snout was its primary armament - a powerful flamethrower.[2] Underneath its high mudguards, which had been extended into short backswept wings, were huge solid rubber tyres for maneuvering in the swampland.[2] Bond identifies them as probably aeroplane tyres, nearly twice as tall as himself.[2] At the rear there was a small trailing wheel for stability.[1] On top of the vehicle was an armored domed cabin, with a small square egress hatch at the rear.[2] Inside, its two operators sat on simple iron tractor seats.

Investigating the disappearance of British Secret Service operative, John Strangways, Bond discovers a link between the missing man and radioactive rocks taken from Crab Key - a private island belonging to the reclusive Dr. Julius No. 007 asks local fisherman Quarrel to take him there under the cover of darkness. However, Quarrel is reluctant to do so, stating that there is a dragon on the island. Despite his initial reluctance, he agrees to take Bond to Crab Key. After inadvertently alerting the Doctor's security forces to their presence on the Island, fellow intruder Honey Ryder guides them to a hiding place up stream. Arriving at the hiding spot, they agree to take turns watching out for the dragon, which Honey claims to have seen. When Quarrel spots tracks, Bond insists they follow them to the dragon. The trio follow the tracks until night falls. Eventually they come across a barren swamp, where they are spotted by the "dragon" - an armored vehicle painted with teeth and armed with a flamethrower. As it approaches them Bond and Quarrel attempt to shoot out its tires and lights. They fail and Quarrel is torched to death. Bond and Honey are apprehended by the tank crew and are taken to a compound.

In 1985, the vehicle was re-imagined for a children's talking storybook adaptation of 1962's Dr. No, published in North America by Kid Stuff Records & Tapes. As in the film, Bond encounters the "Dragon" whilst investigating suspicious activity on Crab Key. As he wades through the mangroves, pursued by guards and their dogs, he is ambushed by the Dragon - a large Jeep Wrangler, apparently from the illustrations, equipped with twin flame-throwers. He surrenders to its driver, and is knocked unconscious and taken prisoner.

James Bond creator Ian Fleming based the Dragon Tank on a marshlands swamp jeep with very large wheels which he had seen in March 1956 on the island of Great Inagua in the Bahamas.[3] Notably, the reason for his visit had been to count flamingos for the Audubon Society.[3] Likewise, during pre-production of the 1962 film production designer Ken Adam recalled how the crew "went down to Florida to look at marsh buggies" as the basis for their tank design.[4] The dragon tank was designed by uncredited art director Syd Cain.[5] When Cain found out his name was not in the credits, Broccoli gave him a golden pen to compensate, saying that he did not want to spend money making the credits again.[6] In the 1990s, archivists attempted to locate the original Dragon vehicle only to discover that Eon productions had required the buyer to dismantle and destroy all the key 'dragon' elements.[3]

Likely the real-life basis for the Dragon, a marsh buggy owned by the Gulf Refining Co. (1940). 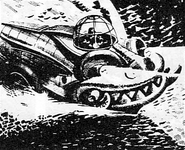 The 'dragon' in the Daily Express comic strip adaptation of the story (1960).