The World Is Not Enough (film)

Elektra King: "I could've given you the world."
James Bond: "The world is not enough."
―Elektra King and James Bond[src]

Elektra Vavra King was the fictional daughter of wealthy oil tycoon, Sir Robert King, but also a criminal mastermind associated with terrorist, Renard. One of the two main antagonists in the 1999 James Bond film The World Is Not Enough, she was portrayed by French actress, Sophie Marceau, and also appeared in the film's accompanying novelization penned by Raymond Benson as well as its video games.

Elektra is the daughter of Sir Robert King and his second wife. Her maternal background is of Azerbaijani descent; the family had fled the country immediately after the Soviet Union was established and relocated to England. Robert King's marriage had become a much noted affair as he managed to acquire his father-in-law's oil business and assimilate it into his own construction enterprise, forming the official King Industries.

Elektra's subsequent birth was also subject of much press coverage, foreshadowing much of the attention she would receive later on in her early adulthood. As the only daughter of a lucrative oil baron, Elektra had a privileged upbringing, becoming a tad bit spoiled in the process. She attended prestigious private schools around Europe and often spent summer vacationing with her maternal family in the Middle East. After college, Elektra decided to follow in her father's footsteps and join King Enterprises.

Much to the media's delight, Elektra's business affiliation and beauty made her a well known figure in the press. The fame eventually drew the attention of the anarchist Renard, who decided to kidnap her in a scheme to extort a large sum from her father. Sir Robert refused to pay the ransom on the advice of family friend (and James Bond's boss) M. Embittered, she became Renard's lover and participated in his scheme to extort money from her family (going so far as to mutilate her own left ear so Renard could send it to her father as a warning) but pretended to have been traumatized by the kidnapping. (Bond thought she suffered from Stockholm syndrome, but may have been blinded by his affection for her).

In 1999[1], Elektra secretly collaborated with Renard to blow up her family's oil pipeline, becoming Bond's lover to throw off suspicion. When Renard publicly threatened to destroy the pipeline, however, she showed her true colors and kidnapped M, whom she blamed for her father's betrayal in not paying her ransom years earlier. Her plan was minutes away from completion when Bond stormed her hideout. Soon Bond and Christmas Jones are captured by Elektra's henchmen. Christmas is taken aboard the submarine, which was seized by Renard's men. Bond is taken to the tower, where Elektra tortures him in a garrote. During said torment, Elektra taunts and seduces Bond, insisting that she had a certain power that no man could resist, and that Bond's affection for her had been his undoing. Bond denied that Elektra ever meant anything to him, even as Elektra slowly but steadily brought him closer to death.

Having survived the bombing, Valentin Zukovsky and his men take mount a raid on the tower. Reaching the room where Elektra has Bond, he is shot by her. Dying, Zukovsky uses his cane gun to free Bond, who then chases after the fleeing Elektra, freeing M in the process. During a tense standoff, and at the business end of a gun, Bond demands that Elektra order Renard to call off the imminent meltdown in the city. Elektra then taunts Bond, telling him that he wouldn't shoot her and that he would miss her as she didn't see him as a killer of a former lover in cold blood. She then radios Renard and in her overconfidence on her hold over Bond, she instead tells him to proceed with the plan, and out of anger, Bond immediately kills her with a single gunshot while exclaiming "I never miss".

Elektra King is a woman who is used to getting what she wants. She doesn't like to be resisted and will do anything to get her way, including using her charms, torturing and killing anyone who tries to stand in her way. She's also an excellent tactician and actress who passes for an innocent girl when she's really one of the brains behind her operation.

Elektra inspects the construction of The King Pipeline.

Bond and Elektra take to the slopes.

Bond attempts to calm down Elektra after being buried by the attacking Parahawks.

Elektra meets with Zukovsky in his casino.

Bond and Elektra spend the night together.

Renard does his best to try to pleasure Elektra as she subtly mourns Bond's apparent death.

Bond confronts Elektra at the top of the tower. 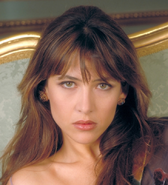 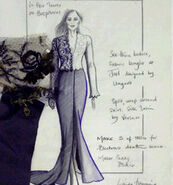 Elektra thinks both Bond and Christmas have died in the pipe bomb blast. 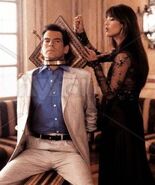 Elektra's iconic red dress on display at the 50 Years Of Bond Style exhibition.
Add a photo to this gallery

Retrieved from "https://jamesbond.fandom.com/wiki/Elektra_King?oldid=104276"
Community content is available under CC-BY-SA unless otherwise noted.