Deceased; incinerated in an explosion

Elvis was the fictional right-hand man of Quantum operative, Dominic Greene. The character was a supporting antagonist in the 2008 James Bond film Quantum of Solace and was portrayed by Swiss actor, Anatole Taubman.

As part of his assignment with Quantum, Elvis is tasked with assisting Greene's mission to secure a resource-rich patch of land in Latin America by funding the overthrow of the Bolivian president in favor for exiled Bolivian General Luiz Medrano.

In the film, Elvis first appears when Bolivian secret agent Camille Montes storms along a dockside in Port-au-Prince, Haiti, to confront Greene for trying to have her killed by hitman Edmund Slate. He talks to his mother in Swiss-German on the phone. The bodyguard tries to stop her from entering the area, but she just pushes him aside; for good measure, she later ends up escaping with James Bond, quickly establishing Elvis as somewhat ineffectual (an impression not helped by his ridiculous bowl-cut hairpiece).

Elvis then accompanies Greene in their private jet during a meeting between Gregg Beam and Felix Leiter, this time remaining firmly in the background as his boss and the crooked CIA agent conduct their business. He is later present at the Tosca performance where he stands guard over Greene in his personal box.

Shortly after the confrontation with Greene at the the Greene Planet Fundraiser Party, Elvis is dispatched to stop Bond and Camille from leaving the area, chasing them up a stairwell. However, Bond's MI6 partner Strawberry Fields "accidentally" trips Elvis, sending him falling down the stairs and allowing Bond and Montes to escape. To add insult to injury, Elvis is seen wearing a neck brace from then on.

Elvis and Greene's driver are later seen at the Eco Hotel in Bolivia's Atacama Desert, where they watches over Greene's meeting with General Medrano and Colonel Carlos. Though Greene is able to talk Medrano into signing the deal with Quantum, the meeting is interrupted when Bond arrives on the scene, killing Carlos and sparking a fire inside the hotel, forcing Greene to evacuate the area as Bond fights off the remainder of Medrano's soldiers. Per Greene's instructions, Elvis is ordered to stay behind and cover his employer's escape, keeping his gun trained at the door in readiness for Bond. Unfortunately for him, the fire sparked by Bond's arrival in the building reaches one of the hotel's hydrogen fuel cells at this point, causing a massive explosion that engulfs the room and much of the hotel, incinerating Elvis on the spot.

Bond eventually learns that Quantum was nothing more than a front run by Ernst Stavro Blofeld of global organization SPECTRE, and that Elvis, along with Greene and Medrano, were all pawns as part of Blofeld's true plot to wreak psychological pain on Bond. 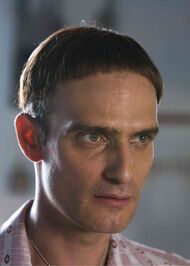 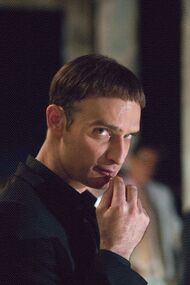 Retrieved from "https://jamesbond.fandom.com/wiki/Elvis?oldid=97503"
Community content is available under CC-BY-SA unless otherwise noted.