Second-in-command of the SPECTRE

Emilio Largo was a fictional criminal operative and board member of the secretive criminal organisation, SPECTRE. Based on the literary character from the 1961 Ian Fleming novel Thunderball, he was the main antagonist in the 1965 James Bond film of the same name and was portrayed by the late Italian actor, Adolfo Celi, but voiced by actor, Robert Rietty. Largo is also a multiplayer character in the 2010 video game GoldenEye 007. He would later re-imagined for the 2015 mobile game James Bond: World of Espionage.

In the 1965 film adaptation, Largo is portrayed as a grey-haired man in his late 40s who wears an eye patch and works for the criminal organization, SPECTRE. In the film, Largo is "No. 2" and head of their current extortion operation.

As with the novel, Largo has two main headquarters; a villa at Palmyra and his private yacht, the Disco Volante. Unlike the novel, his estate at Palmyra plays a much greater role in the film adaptation. When not transporting the warheads, Largo spends much of his time at the villa, which now includes a large swimming pool filled with his prized shark collection. James Bond is later knocked into the shark pool, but manages to narrowly escape.

"Our intention is to demand a ransom from the North Atlantic Treaty powers of 280 million dollars. A hundred million pounds. "
― Largo's plan.[src]

Largo's scheme in Thunderball, at the time, was unique and ingenious. It involved the theft of a couple of NATO warheads to blackmail the organisation into paying SPECTRE 100 million dollars with the threat that they’ll use the bombs to destroy a major city in either the United States or the United Kingdom if it isn’t met. This scheme has been used countless times since Thunderball and is even a joke in the Austin Powers series of movies.

To kick-start the plot, Largo sends a SPECTRE agent named Angelo Palazzi, who has had plastic surgery and trained to look and act like French military officer François Derval, to assassinate the real Derval, take his place and hijack the plane carrying the bombs. After gassing him at his hotel room, however, Angelo gets greedy and demands that he get paid a quarter million for the job instead of just $100,000, which is seemingly agreed to by fellow agent, Fiona Volpe. However, after successfully completing his job, which included gassing the other pilots onboard, and landing the fighter jet into the ocean, he finds himself stuck in his pilot seat, and when Largo personally swims down to meet him in swim gear, he pulls out a knife and severs his air hose, leaving him to drown in his seat as punishment for wanting to be paid more. He then proceeds to have his minions cover the jet, along with all its deceased personnel, in a camouflaging net under water to keep it hidden where NATO can’t find it.

In the film, his death is less gruesome than the novel, but more dramatic. As Bond and Largo do battle on the bridge of the Disco Volante, the spy is knocked to the floor by a sudden collision. In the confusion Largo snatches a nearby pistol and holds 007 at gunpoint. As he prepares to pull the trigger Domino shoots him in the back with a harpoon. He turns and collapses dead on the ship's wheel, jamming the controls. Unable to move the body and with seconds to spare, Bond, Domino and Ladislav Kutze leap overboard as the Disco Volante runs aground and explodes violently.

As SPECTRE's second-in-command and chief extortionist, Emilio Largo was by far one of the darkest, most evil and terrifying members of the organization, probably surpassed only by Blofeld himself, and one of the most sinister villains of the series. Like his big boss, he seemed to care only about profit and perfection. He could convincingly act like a rich gentleman, but was always a coolly calculating man who proceeded with authoritarian efficiency and kept a tight rein on his henchmen. If one of them displeased him or were a hindrance, he promptly executed them or left them for dead, as demonstrated when he had Quist thrown into his shark pool after he failed to kill Bond; and leaving another to be devoured with 007 when they fall in the pool together. He also abandoned several of his men on the rear portion of the Disco Volante so he could escape, leaving them to the US Navy and Coast Guard attack boats.

He seems like he could love Domino for a while, but even this was somewhat undermined from the beginning by him ordering her brother’s death, showing a major disregard for her feelings should she ever discover it, and also tried to slowly and painfully torture her as soon as he suspected that she was betraying him. Also, he could be loyal to SPECTRE, but this seems to be because he simply shared Blofeld’s ideals, lack of empathy and humanity, seeing as he did not interact with him outside attending his meeting to announce his plan to the other members. Their relationship seemed strictly business-related, especially since Blofeld demonstrated numerous times that he had no qualms even executing his lower-ranking subordinates as soon as they began to disappoint him.

In addition, while many of the lower-ranking SPECTRE members like Rosa Klebb and Osato were shocked, if not outright horrified when Blofeld eliminated his agents, Largo reacted with casual indifference when Blofeld brutally electrocuted another board member to death in his chair at their meeting for embezzling their profits (it probably helps that Largo, himself, specialized in torture).

During the underwater scenes, Largo was played by Big John McLaughlin. 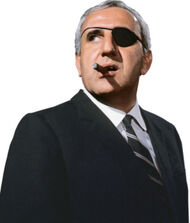