German (DDR at that time)

For Your Eyes Only (Marvel)
Erich Kriegler was a fictional KGB operative, a talented East German biathlon champion and the second in-command of Greek smuggler Aris Kristatos who serves as the secondary antagonist in the 1981 film For Your Eyes Only and its comic adaptation by Marvel Comics. He was portrayed by John Wyman.

Erich Kriegler is first seen in Cortina, going through a biathlon course. James Bond, who is skiing with the niece of Aris Kristatos, Bibi Dahl, is forced by Bibi to watch Kriegler, recognizing the man's athletic and marksmanship when he hits every target instantly. Bibi desperately tries to get Kriegler's attention but he only scowls at her.

When Bond takes his leave from Bibi and plans to ski down the mountain, he is attacked by Kriegler, who has been lying waiting in the forest. Kriegler shoots at Bond but misses, allowing Bond to take cover behind a tree. Though he manages to shoot Bond's gun out of his hand, he fails to ultimately hit Bond and the agent escapes under gunfire. When Bond arrives at the base of the mountain, he watches Kriegler arriving moments later and talking to Emile Locque.

Seeing that Bond arrived as well, Locque and Claus, another henchman, follow the agent, but are unable to attack him as there are too many witnesses. Protected by the masses, Bond enters a crowded elevator which takes him on a ski jump. Though Locque and Claus are in the elevator as well, they still cannot attack. Arriving on top, Bond tries to escape by skiing down, but Claus skis with him as well, only to be knocked down as well. Kriegler, who had been lying waiting at the bottom is disarmed when Bond jumps right over him, knocking the rifle out of his hands. Pursued by two henchmen on motorcycles Bond is eventually able to defeat his pursuers. Kriegler, who follows by motorcycle as well, is eventually knocked out of the saddle. Out of frustration, he lifts his motorcycle and throws it after Bond, but misses the spy by far.

Returning to the ice rink, Bond asks Bibi about Kriegler, finding out that he is defecting from East Germany.

Waiting for the exchange and Death

Kriegler is encountered again when Bond obtains the ATAC from the sunken ship. Along with Kristatos, he is present when Bond triggers a alarm, causing Kristatos to send a henchman down there, who is ultimately defeated by Bond. When Bond and Melina get back to the surface, they find that Kristatos and his henchman have taken over their ship. Kriegler then tells Kristatos that he will deliver the ATAC to the KGB and return with the money, but Kristatos states that their deal was that he would turn the ATAC over at a location of his choosing. He tells Kriegler that he will deliver it to the KGB at St. Cyrils, a clifftop monastery. Kriegler accompanies Kristatos to the place, where they wait for the arrival of General Gogol.

While they are waiting, Bond, who had been in a fistfight with a henchman and falls through a window into the room. Kriegler tries to shoot him but Bibi knocks the gun out of his hand, for which he backhands her, knocking her unconscious. Kriegler then fights Bond while Kristatos leaves to deliver the ATAC, eventually ripping a massive stone sink out of the wall to smash Bond with it. Using a candelabra and the sink's enormous weight, Bond pushes Kriegler out of a window, causing the KGB assassin to fall to his death.

Kriegler is a biathlon champion of East Germany and the strength of Kristatos' operation. Devoted and trained, he is relentless in his quest for his objective and his own perfection. He is dedicated to improving his physical performance, but to the loss of his intellectual development. Having succeeded for all his life, defeat is not something that Kriegler can handle with any dignity, making him habour hostility and quickly form hatred. 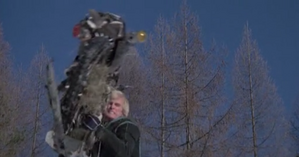 Retrieved from "https://jamesbond.fandom.com/wiki/Erich_Kriegler?oldid=95693"
Community content is available under CC-BY-SA unless otherwise noted.