You Only Live Twice (novel)
Ernst Stavro Blofeld is the fictional founder and head of the criminal organisation SPECTRE and the archenemy of the British Secret Service agent James Bond. The character was created by writers Ian Fleming and Kevin McClory and first appeared in the 1961-64 James Bond novels Thunderball, On Her Majesty's Secret Service, and You Only Live Twice. The character was subsequently adapted for the EON Productions James Bond film series, beginning in 1963 with From Russia with Love, as well as several other portrayals.

In the novel series by Ian Fleming, Blofeld makes three appearances in what is considered the 'Blofeld Trilogy'. In John Griswold's 'Ian Fleming's James Bond', George Almond provided illustrations depicting Blofeld in each novel, based on Fleming's own descriptions of the character.

Fleming details Blofeld's background in the novel Thunderball; none of his background is ever revealed in the Bond films. Ernst Stavro Blofeld was born on May 28, 1908 to a Polish father and a Greek mother in Gdynia. Blofeld attended the University of Warsaw where he studied economics and political history. He later went to the Warsaw Technical Institute to study engineering and radionics. He then took a communication position with the Polish government, at the Ministry of Posts and Telegraphs. He began to use his position for insider trading, buying and selling stocks at the Warsaw Stock Exchange.

Foreseeing World War II, Blofeld made copies of top-secret wires and sold them to Nazi Germany. Before the German invasion of Poland in 1939, he destroyed all records of his existence, then moved to Turkey, where he worked for Turkish radio and set up an intelligence organization. During the war, he sold information to both sides. After the defeat of Erwin Rommel, he decided to back the Allied war effort; ironically, he was awarded numerous medals by the Allied powers after the war's end. After the war, Blofeld temporarily moved to South America before founding SPECTRE.

Despite his willingness to murder millions to get what he wants, Blofeld has a few professional scruples. For instance, in the novel Thunderball he learned that during a standard fundraising kidnapping mission of a young girl, the responsible agent had sexual relations with her. Although Blofeld says that the relations may have been "voluntary or involuntary on the girl's part," he had the agent killed as punishment and returned the girl and half the ransom to her father as compensation. His reasons had nothing to do with morality, but rather with the importance of SPECTRE being known for keeping their word to those they did their "business" with. Blofeld ruled by fear mixed with respect from his subordinates. When a SPECTRE agent fell out of line he was publicly made an example of with various methods of death.

Blofeld first appears in a minor role as the leader of SPECTRE in the 1961 novel Thunderball. The plot that he formulates is carried out by his second-in-command Emilio Largo. Blofeld is described physically as a massive man, weighing roughly 20 stone (280 lb; 130 kg), has black crew-cut hair, black eyes (similar to those of Benito Mussolini's), heavy eyelashes, a thin mouth and long pointed hands and feet. He has violet-scented breath from chewing flavoured cachous (breath mints). Blofeld's lifestyle is described in one chapter in Thunderball: "For the rest, he didn't smoke or drink and he had never been known to sleep with a member of either sex. He didn't even eat very much."

Blofeld finishes looking over his cohorts in crime, noting the one member of SPECTRE who evades his glance. He takes a violet-scented breath freshener, as is his custom before saying something disagreeable. Blofeld reviews SPECTRE's crimes of the last few years, including drugs, espionage, and blackmail, netting a healthy profit to the criminal organization. The current undertaking is Plan Omega, a much more profitable venture.

Blofeld moves on to discuss the last undertaking, a kidnapping. He has No. 7, one of the French mafia men, stand. Blofeld recounts how the kidnapped girl was molested during the kidnapping. Perhaps it was consensual, perhaps not, but it violated SPECTRE's promise to return the girl untouched. As a result, Blofeld has returned half of the million-dollar ransom. The standing man, No. 7, knows he is innocent and No. 12 is guilty, but he trusts Blofeld and remains standing. Blofeld then promptly kills No. 12 and acknowledges that he was merely using No. 7 to throw No. 12 off guard.

Blofeld is absent from the next book, The Spy Who Loved Me, though its events take place while Bond is battling SPECTRE in North America. In On Her Majesty's Secret Service (1963) Bond learns that Blofeld has radically altered his appearance—he is now tall and thin; has reduced his weight to 12 stone (170 lb; 76 kg); sports long silver hair, a syphilitic gumma on his nose, and no earlobes; and wears dark green tinted contact lenses. He is hiding in Switzerland in the guise of the Comte Balthazar de Bleuville, and Bond defeats his plans to destroy Britain's agricultural economy. In the final sequence of the novel, Blofeld gets revenge by murdering Bond's new wife, Tracy.

In You Only Live Twice published in 1964, Blofeld returns and is found by Bond to be in hiding in Japan under the alias Dr. Guntram Shatterhand. In this appearance rather than being just thin has gained some muscles, has a gold-capped tooth, a fully healed nose, and a drooping grey mustache. Bond describes Blofeld on their confrontation as being "a big man, perhaps six foot three (190 cm), and powerfully built". Bond strangles him to death at the end of the novel. In both On Her Majesty's Secret Service and You Only Live Twice, he is aided in his schemes by Irma Bunt, who is clearly his lover in the latter and posing as Shatterhand's wife. Bond incapacitates her in their Japanese castle base before it blows up, killing Bunt.

The final mention of Blofeld is in the beginning of the next book, The Man with the Golden Gun, published in 1965.

Born to a Polish father and a Greek mother, Ernst Stavro Blofeld was heir to a small shipping concern, which he built into a lucrative, and to all appearances legitimate business empire. Behind the veneer of respectability, Blofeld was the leader of the resuscitated SPECTRE crime organisation, which had been thought dismantled since the Cold War. The twenty stone, six-foot six former competitive weightlifter personally terminated operatives who disappointed him; often nearly decapitating them with a garrotte. Circa 2021, Blofeld's leadership of the organisation was threatened by an internal coup led by Number Seven, Titania Jones. In need of outside assistance to settle the civil war, the villain lured James Bond to Paris and, after subduing him, made the spy a proposition - to assassinate Jones in exchange for €15 million and the life of his CIA friend, Felix Leiter. Bond agreed. 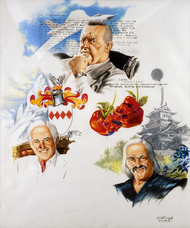 Various depictions of Blofelds during each of the novels, by artist George Almond.