The Eurocopter Tiger is a four-bladed, twin-engined attack helicopter manufactured by Eurocopter (now Airbus Helicopters). Designed to resist various forms of electronic warfare, it was undergoing combat trials in the 1990s as it readied for implementation with European defense forces.[2] The Tiger is prominently featured in the 1995 James Bond film GoldenEye and its accompanying novelization by John Gardner. It was re-named the "Pirate" for the 1997 video game GoldenEye 007. The aircraft was replaced by two separate fictional helicopters (Reg: 91548 and the Prototype) in the 2010 re-imagining of GoldenEye 007.

The Tiger is a high-tech stealth vehicle, developed by Eurocopter for the advanced technological battlefield of the 21st century. A prototype of the aircraft was being tested off of the French frigate La Fayette, which was in dock in Monte Carlo for a public demonstration when it was stolen by Janus Operatives, Xenia Onatopp and Arkady Orumov. It was sought it out for it's anti-radiation properties, to utilize during their test fire of the electromagnetic super-weapon: GoldenEye. The two operatives murdered the pilots and then impersonated them as they hijacked the helicopter. James Bond attempted to thwart the theft, but was restrained by French authorities as the stolen Tiger left the scene.

Onatopp and Ourumov then used the helicopter for their infiltration of Severnaya, where they murdered the technical staff and stole the key to the GoldenEye. They then fled the scene aboard the Tiger as the weapon was fired upon Severnaya to wipe clean any evidence of their activities. As designed, the Tiger safely fled the area, unaffected by the resulting EMP which destroyed the facility and a trio of Russian MIGs deployed to investigate the situation. Monitoring the scene via satellite surveillance, MI6 lost track of the Tiger in the aftermath of the blast; 007 was sent to track down the Tiger and the GoldenEye before either could be used again.

In his face-to-face meeting with Janus, 007 discovered the Tiger helicopter at a statue park in St. Petersburg where Janus awaited his arrival. Janus himself, revealed to be Bond's former ally Alec Trevelyan then captured Bond and strapped both him and Severnaya survivor Natalya Simonova in the Tiger, intending to destroy it along with themselves. The Tiger launched a pair of anti-aircraft missiles at itself, and Bond hit the eject button just as the missiles found their target, destroying the Tiger.

The Eurocopter Tiger is renamed the "Pirate", a stealth helicopter of similar design that is targeted for theft by Janus while undergoing testing aboard the FS La Fayette. To steal it, a team of Janus commandos overtake the vessel and take the crew hostage, intending to blow up the vessel as they flee with their prize. MI6 sends Bond to resolve the crisis, saving the ship and its crew but unable to prevent the Pirate's capture. However, Bond plants a tracking bug on the vehicle, prompting him to pursue it to Russia in the hopes of finding Janus. The helicopter as in the film is finally found in the statue park in St. Petersburg, where Bond rescues Natalya before it is destroyed by Janus. Bond eventually recovers the flight recorder from Defense Minister Dmitri Mishkin at the Archives, proving the traitorous General Ourumov's involvement with Janus.

Development of the real-life Tiger started during the Cold War, and it was initially intended as an anti-tank helicopter platform to be used against a Soviet ground invasion of Western Europe. During its prolonged development period the Soviet Union collapsed, but France and Germany chose to proceed with the Tiger, developing it instead as a multirole attack helicopter. It first entered service in 2003 and achieved operational readiness in 2008.

On the 1999 Special Edition DVD of GoldenEye, the director's commentary notes the aircraft's appearances in the film's Monte Carlo scenes were of a prototype Tiger provided by the French Navy along with its test platform, the FS La Fayette.[3] Its other appearances throughout the rest of the film were scale miniatures constructed by Derek Meddings' model unit at Leavesden studios in England.[4] Unexpectedly, the night before shooting it snowed heavily, excessively covering the set and negatively affecting the model helicopter's airworthiness.[5] 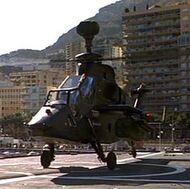 Retrieved from "https://jamesbond.fandom.com/wiki/Eurocopter_Tiger?oldid=82220"
Community content is available under CC-BY-SA unless otherwise noted.