The Fabergé egg is a jewelled egg created by the House of Fabergé, in St. Petersburg, Imperial Russia. Virtually all were manufactured under the supervision of Peter Carl Fabergé between 1885 and 1917. Such an item made its first James Bond appearance in Ian Fleming's short story "Property of a Lady", which was originally published in the 1963 book The Ivory Hammer: The Year at Sotheby's and later the Octopussy collection.[1] The story and its Fabergé egg were subsequently adapted into the 1983 James Bond film Octopussy, as well as a module of the James Bond 007 tabletop role-playing game, based on the film.

Property of a Lady (short story)

The plot idea for the Fabergé auction originates from Ian Fleming's 1963 short story, "Property of a Lady".. Published in "Octopussy and the Living Daylights" (1966), Fleming's hard-warn spy is on the tail of a KGB officer who bids over the mark for an already costly Fabergé Egg in order to pay off an internal agent, Maria Freudenstein, who is feeding them cipher codes

In the 1983 film Octopussy, the Imperial Coronation Egg is one of numerous priceless Imperial Russian treasures supplied to Kamal Khan by rogue Soviet General Orlov. The treasures were replaced with forged replicas while Khan smuggles the real versions into the West via Octopussy's circus troupe and sells them at auction. The smuggling scheme is interrupted and comes to the attention of MI6, when undercover British agent 009 discovers and steals the fake Fabergé Egg from the circus while they are performing in East Berlin. Although fatally wounded, he manages to bring the Egg to the British Ambassador in West Berlin. The replica Egg now gone, Orlov contacts Khan in a desperate bid to get the original Egg back from auction at Sotheby's in London before it can be sold.

"An Imperial Easter Egg, known as the Coronation Egg, by Carl Fabergé. Originally presented to Her Imperial Highness the Tzarina Fedoronova by His Majesty Tzar Nicholas II in the year 1897. The superb green gold Egg, enameled in a slightly paler translucent green/blue over an engraved field, is enclosed by gold laurel leaf trellis work, each intersection being embellished by an elegant blue sapphire and pearl four petaled flower, the petals being of gold with a pure and matched pearl set within each petal. A large portrait diamond is set in the top of the Egg within a cluster of ten brilliant diamonds, through the table of this stone the Empress is seen, the crowned 'A' described in rose diamonds, and the Russian O in cabochon rubies set in an opaque white enamel plaque. Another, smaller, portrait diamond is set within a cluster of rose diamonds at the upper end of the Egg, beneath which the date is inscribed in a similar plaque.

With this egg the surprise content is an exact replica of the Imperial coach as used at the Coronation of Nicholas and Alexandra in Moscow. In yellow gold and strawberry colored translucent enamel, the coach, one of the most splendid achievements of the goldsmith's art, is surmounted by the Imperial Crown in rose diamonds and six double headed eagles on the roof. Thus the Egg with its truly fantastic content and its diamond set golden [illegible] band is evidently a master-piece of the Jeweler’s art and completely unique, a rare and exceptional point of interest to the true collector. Its full interim history is available to the purchaser and at this moment is offered for sale at auction simply as the property of a lady."

Meanwhile, 007 is also sent to the auction by MI6 in a bid to flush out the seller. Suspicious of Khan's interest in the Egg, he impromptu bids on it - greatly driving up the item's price to determine how desperately the villain wants it. While examining the item, Bond covertly swaps the priceless original for the fake taken by 009. He follows Khan to India, where he makes it clear to the villain that he has the Egg. Bond permits Khan's associate, Magda, to another fake Fabergé egg (made by the british goverment which Kamal thinks is the real) fitted with listening and tracking devices by Q. After being captured, Bond escapes from his room and he listens in on the bug in the Fabergé egg and discovers that Khan is working with Orlov, who is seeking to expand Soviet control into West-Central Europe. Orlov, incensed at the trouble the forgery has caused, accidentally smashes the original Egg to pieces with the butt of his pistol, assuming it to be the fake.

In the 1998 Gameboy game James Bond 007 a Jeweled Egg hidden in Kurdistan could be traded for an "underground pass" in Marrakech; allowing the player to access a speedy underground passage network that connected disparate parts of the city.

For the 1983 film Octopussy production designer Peter Lamont commissioned the jewellers Asprey to make two Fabergé Eggs.[3] Although Piotrowski produced many variations for the design of the Fabergé Egg, the final choice was a replica in the style of the Imperial Coronation Egg made in 1897.[3] 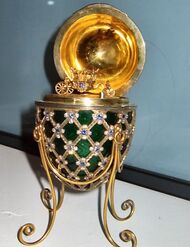