View source
watch 01:39
Hawkeye Is Here To Amaze - The Loop
Do you like this video?
Play Sound

Fear Face was a series of comic strips that ran in The Daily Express newspapers in the United Kingdom between January 18 and April 20, 1971. The series was subsequently licensed by Swedish publisher, Semic Press, who published their translation of the story in 1972, titled "Stålspionen" (Steel Spy). In April 2006, the original story was reprinted by Titan Books alongside three other James Bond comics strips in their paperback compilation, The Golden Ghost.

A man reported to the Police that he witnessed a nightclub dancer be murdered by a metal man. Meanwhile, Briony Thorne, much to MI6's alarm ,returned to England after having been expelled from the 00 Agent program for being a spy for Chinese Communists. James Bond returned to his apartment to find Thorne there waiting for him. Briony swore to Bond that she was framed, and rather than selling out two agents in Honk Kong, they were all captured, but she was sold to Italians who smuggled her to Rome under hypnotic drugs to frame her. Bond then flipped a coin to decide weather or not to believe her, and she gave him two names she heard, Magnus Mining, and Lambert. Bond then visited Sir William Magnus, owner of Magnus Mining, who feigned being ignorant of any involvement with spies, aside from the fortune connected with three recent ore strikes, and denied knowing a "Lambert", whom Miss Moneypenny discovered to be Ivor Lambert, an engineer and suspect in the recent murder of a stripper. Bond then visited Special Branch for information and learned that the murderer was at one point suspected to be a robot, tied with Lambert's connections to Technotron, LTD. Meanwhile, a bearded man, that was later revealed to be a robot, broke into Magnus Mining, and blew up the executive offices. Bond then learned that At Technotron, Lambert had been involved in creating a system to remotely control robots using one's body. Bond returned to his home to tel Briony, but found that Bill Tanner had infiltrated it on M's orders, and planned to turn them both in. Bond knocked Tanner out and left him in the apartment while he and Briony went to see Ivor Lambert. At Lambert's home they discovered that he is in league with the leader of the gang that kidnapped Briony, Ferenc Kress. Kress is selling a video-tape, recorded from the robot's vision at the Magnus Mining heist, and planned to sell it back to Magnus for 100,000 pounds, but now planned to auction it off to other mining firms. Bond was able to break free from his bonds, and subdue the three parties long enough to call MI6 about the whole situation. After a full-scale investigation, Briony was re-instated as Agent 0013. 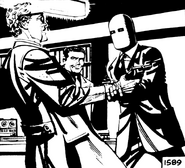