Felix Leiter is a fictional American CIA intelligence operative. Based on the literary character created by Ian Fleming, Leiter is portrayed by American actor, Jeffrey Wright, and first appeared in the 2006 film, Casino Royale, and was later seen in its 2008 sequel, Quantum of Solace. He again reprises his role in No Time to Die (2021), making him the only actor to play the role of Felix Leiter in three films.

At the Casino Royale in Montenegro Leiter plays in the high-stakes poker game against James Bond and Le Chiffre. Unable to beat Le Chiffre, Leiter backs Bond with a $5 million buy in, after Bond misreads Le Chiffre's bluff, under the agreement that the CIA be the ones to arrest Le Chiffre after the game.

Later, Felix and Gregg Beam work with General Medrano's regime to ensure America gets oil rights in Bolivia when Medrano becomes president by force. Beam indeed negotiated a deal with Quantum operative, Dominic Greene, to ignore his orchestrated coup in Bolivia in exchange for oil, which the section chief assumed Greene had discovered; incorrectly interpreting Greene's bulk purchase of water piping. He and Leiter travel with the Quantum representatives to Austria and while discussing their business arrangements, Greene mentions that he has a 'pest' he would like eliminated as part of the deal. Beam glances at the photo of James Bond and passes it to Leiter, duplicitously asking him to identify it. When Felix lies to the men, Beam identifies Bond and tells Greene he will deal with him. Later in La Paz, 007 phones Leiter at their front office, Incan Exports, and arranges a meeting. Beam sends his men after Bond to kill him. However, Felix, disgusted by Beam's corruption, informs the spy of their dealings with Medrano and that their time window to talk is 30 seconds and warns him about his pursuers, allowing him to escape at the last minute. Following Medrano and Greene's demises, Beam is exposed for his crimes and Leiter replaces him as section chief as M says that to Bond.

Bond mentions Felix Leiter briefly to Lucia Sciarra as a form of protection.

Years after Bond's mission in Bolivia, when MI6 scientist Valdo Obruchev is abducted by SPECTRE, Leiter and his partner Logan Ash are sent to track down Bond and convince him to help track down Obruchev. Bond refuses to help; however, he changes his mind after discovering that Obruchev was working on "Project Heracles", a bioweapon containing nanobots that spread like a virus upon touch and are coded to specific DNA strands so they are only dangerous if programmed to an individual's genetic code.

Bond and another CIA agent named Paloma are able to capture Obruchev and the British brings Obruchev back to a boat where Leiter and Ash are waiting. Despite Ash telling Bond that his mission is over, Bond refuses to leave and angrily demands to know who Obruchev is working for. Ash, realizing that there's no way out, reveals his allegiance by pulling out a gun and shooting Leiter in the stomach before kicking him into the hull. The corrupt agent later sinks the ship with a limpet mine before leaving with Obruchev and bringing him over to his boss Safin. Bond escapes the ship, but Leiter bleeds out and drowns to his death, much to Bond's distraught.

Following Blofeld's death, Bond faces off against Ash again, as he invokes Leiter's name as justification, just before Ash is crushed to death by an overturned vehicle in revenge for Leiter's death. After killing Safin and his remaining men, Bond joins Leiter in death by sacrificing himself in a missile explosion to foil Safin's plot.

Casino Royale allowed Leiter to re-appear and he and Bond meet for the first time in the film. Early script drafts for Quantum of Solace gave Wright a larger role, but his screen time was restricted by on-set rewrites. Wright became the second actor to play the role of Leiter multiple times after David Hedison in 1973's Live and Let Die and 1989's Licence to Kill. He returned to the role in No Time to Die. 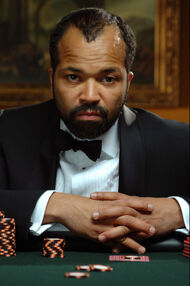 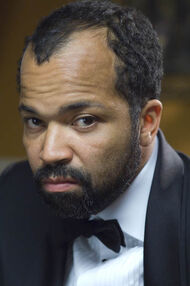 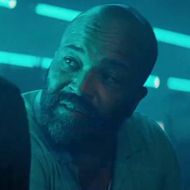 "I need a favor, brother"

Felix and Bond in the Jamaican bar.