A deadly assassin in SPECTRE's execution branch, Fiona Volpe becomes NATO pilot Major François Derval’s mistress in order to steal a Vulcan bomber and its precious cargo of two atomic bombs, which SPECTRE plans to use for a blackmail operation.

The evening of Derval's scheduled departure on a NATO training exercise, Volpe is seen making out with Major Derval, until he excuses himself to report for duty. Derval is then shocked to see Angelo Palazzi, who looks exactly like him, and is promptly killed by Palazzi. However, after receiving his payment from Volpe, Angelo demands more - a quarter of a million dollars. Count Lippe, the second of the three conspirators, threatens Angelo with a silenced pistol, but is instructed by the more pragmatic Volpe to put it away. She agrees to his demands to avoid further complications, saying time is of the essence and the plan must go through as scheduled, and feigns agreement that Palazzi deserves double for the time and effort he invested in becoming Derval.

Upon successful completion of the operation, SPECTRE leader Ernst Stavro Blofeld orders the execution of Lippe as punishment for his poor judgement in hiring the greedy Palazzi. The following morning, Volpe assassinates Lippe by destroying his car with a concealed missile launcher on her BSA Lightning A65L Motorcycle. Volpe is later seen pushing the motorcycle into a pond, presumably to hide evidence.

Later, in the Bahamas, James Bond meets Volpe while hitchhiking and she startles Bond with her fast driving. It is here that 007 first notices her distinctive SPECTRE insignia ring. They arrive at their hotel in Nassau. Fiona holds his colleague Paula Caplan captive, but the latter commits suicide by taking cyanide before revealing anything. Returning to his suite, Bond discovers Fiona is his closest neighbour, and sneaks into her apartment, where he finds her in bathtub. She gets out and the two make love. Grasping the headboard she exclaims, "Mmm... this bed feels like a cage, all these bars. Do you think I'll be safe?"

While leaving for the Junkanoo, Bond opens the door to come face-to-face with Vargas and Janni. Slamming the door shut, he turns to find Volpe holding a gun on him. She lets them in and after belittling Bond about his ego they take him captive.

"But of course, I forgot your ego, Mr. Bond. James Bond, the one where he has to make love to a woman, and she starts to hear heavenly choirs singing. She repents, and turns to the side of right and virtue... but not this one!"
― Volpe belittles Bond.[src]

As they sit in traffic Bond improvises a distraction by knocking an intoxicated reveler's liquor over the car's interior and igniting it with Volpe's cigarette lighter. He flees the burning vehicle into the Junkanoo crowds, pursued by Volpe and her men. Shot in the ankle, Bond inadvertently leaves a blood trail which leads them to the Kiss Kiss Club, where 007 attempts to mix in with the dancers.

Volpe approaches Bond as he is dancing with another woman. Assuming Volpe is his wife, the woman abruptly leaves, and the pair begin slow-dancing. As they dance another henchmen takes aim at Bond from behind a nearby curtain. Bond notices in time and spins Volpe into the path of the bullet, piercing her spine and killing her instantly. Her henchman flee and 007 drops Volpe's corpse into a nearby chair, quipping to the couple sitting at the table "mind if my friend sits this one out? She's just dead."

Luciana Paluzzi was one of the actresses that tried for the role of Domino Derval. Though Paluzzi didn't get the part, she was later offered and accepted the role as the redheaded femme fatale assassin "Fiona Kelly" who originally was intended by writer Richard Maibaum to be Irish. The surname "Kelly" was later changed to Volpe (incidentally, Italian for fox) in coordination with Paluzzi's nationality.[1] Initially disappointed for not being accepted to play Domino Derval, after being cast as Fiona, Luciana Paluzzi felt that playing a villain was actually quite interesting.

During the driving sequence, Fiona Volpe was dubbed by stuntman Bill Ivy.

Detaining Derval in their hotel room.

The assassin bids a final fair-well to the pilot.

Attempting to seduce Bond, Volpe makes use of his suite's facilities.

Volpe emerges from the bathtub.

Accidentally shot in the back, Volpe dies instantly. 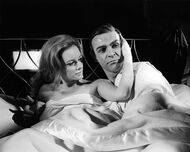 Promotional photograph of Luciana Paluzzi and Sean Connery on set. 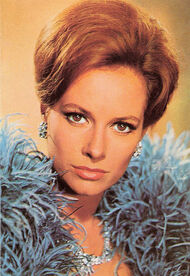 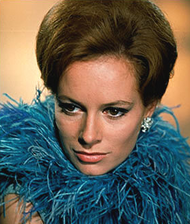 Retrieved from "https://jamesbond.fandom.com/wiki/Fiona_Volpe_(Luciana_Paluzzi)?oldid=101303"
Community content is available under CC-BY-SA unless otherwise noted.