James Bond: For Your Eyes Only

For Your Eyes Only, alternatively titled James Bond: For Your Eyes Only, is a Marvel Comics comic book adaptation of EON Productions' film of the same name, written by Larry Hama, pencilled by Howard Chaykin, inked by Vincent Colletta, and edited by Dennis O'Neil.[1] Initially published as issue 19 of Marvel Comics Super Special, the story was also repackaged as a two-issue comic book adaptation of the film.[2][3] The first issue was released in October 1981 and was soon followed by the second issue in November of the same year.

It was the second film in the series to have a comic book tie-in, following a Dr. No comic in 1962. Marvel Comics would go on to publish an Octopussy comic book adaptation in 1983.

While visiting the grave of his wife Tracy, James Bond is called away from his mourning by an MI6 helicopter sent to collect him. However, in mid-flight, the aircraft is revealed to be under the control of an old adversary. 007 gains control of the helicopter, lifts the villain into the skies and throw him down an industrial chimney stack. Meanwhile, the British information gathering vessel St. Georges, containing the Automatic Targeting Attack Communicator (ATAC), is sunk after accidentally trawling an old naval mine in the Ionian Sea. The Soviets, learn of the fate of the St Georges and notify their contact in Greece. A marine archaeologist, Sir Timothy Havelock, who had been asked by the British to secretly locate the St Georges, is murdered with his wife by a Cuban hitman, Hector Gonzales.

Bond is ordered by MI6 Chief, M, to retrieve the ATAC before the Soviets, as the transmitter could order attacks by the Royal Navy's fleet of Polaris submarines. He goes to Spain to find out who hired Gonzales, and while spying on the hitman's villa, is captured by his men, but manages to escape as Gonzales is killed by a crossbow bolt. Outside, he finds the assassin was Melina Havelock, the daughter of Sir Timothy, and the two escape. Returning to London, Q Branch uses computerised technology to identify the man Bond saw paying off Gonzales as Emile Leopold Locque, and then goes to Locque's possible location in Cortina, Italy. There Bond meets his contact, Luigi Ferrara, and a well-connected Greek businessman and intelligence informant, Aris Kristatos, who tells Bond that Locque is employed by Milos Columbo, known as "the Dove" in the Greek underworld, Kristatos' former resistance partner during the Second World War. After Bond goes with Kristatos' protégée, figure skater Bibi Dahl, to a biathlon course, a group of men, which includes East German biathlete Erich Kriegler, chases Bond, trying to kill him. Bond escapes and then goes with Ferrara to bid Bibi farewell in an ice rink, where he is attacked by assassins in ice hockey gear.

007 fends off the attempt on his life and discovers Ferrara is dead in his car, with a dove pin in his hand. Bond then travels to Corfu in pursuit of Columbo. There, at a casino, Bond meets Kristatos and asks how to meet Columbo. After Columbo and his mistress, Countess Lisl von Schlaf, argue, Bond offers to escort her home. The two then spend the night together. In the morning Lisl and Bond are ambushed on the beach by Locque and Lisl is killed. Bond is captured by Columbo's men before Locque can kill him; Columbo then tells Bond that Locque was actually hired by Kristatos, who is working for the KGB to retrieve the ATAC. Bond accompanies Columbo and his crew on a raid on one of Kristatos' opium-processing warehouses in Albania, where Bond uncovers crates of Russian-built rocket launchers. After the facility is destroyed, Bond chases Locque and kills him.

Afterwards, Bond meets Melina, and they recover the ATAC from the wreckage of the St Georges, but Kristatos is waiting for them when they surface and he takes the ATAC. After the two escape an assassination attempt, they discover Kristatos' rendezvous point when Melina's parrot repeats the phrase "ATAC to St Cyril's". With the help of Columbo and his men, Bond and Melina break into St Cyril's, an abandoned mountaintop monastery. As Columbo confronts Kristatos, Bond kills the biathlete Kriegler. Bond retrieves the ATAC system and stops Melina from killing Kristatos after he surrenders. Kristatos tries to kill Bond with a hidden flick knife, but is killed by a knife thrown by Columbo. The Russians arrive by helicopter to collect the ATAC, but Bond destroys it by throwing it off the cliff. Bond and Melina later spend a romantic evening aboard her father's yacht when he receives a call from the Prime Minister. 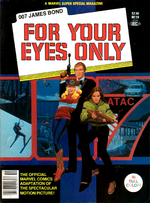 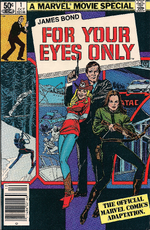 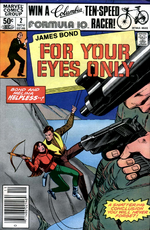 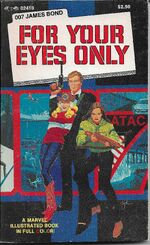