"The Man with the Golden Gun"
"Pistols", "Paco"

Francisco Scaramanga is the villain in the James Bond film and novel The Man with the Golden Gun. In the novel, the character is nicknamed "Pistols" Scaramanga and is also called "Paco" (a Spanish diminutive of Francisco). Scaramanga was played by English actor Christopher Lee, who is also Ian Fleming's cousin.

Francisco Scaramanga, of Spanish Catalan origin, became a trick shot in a circus act while a youngster, and he also cared for one of the circus elephants. When the elephant went on a rampage and Scaramanga witnessed a policeman kill him, the enraged boy retaliated by killing the police officer with a single shot through the heart. He then made his way to the United States, where he found employment as an enforcer for the Spangled Mob, an outfit that plays a role in two other Bond novels; Diamonds Are Forever, where they were the main foe of agent 007, and Goldfinger as an accomplice to Auric Goldfinger's Operation Grandslam.

By the time Bond finally encounters him in The Man with the Golden Gun, Scaramanga is a Caribbean gunman who often works for Fidel Castro's secret police in addition to being engaged in other criminal enterprises such as drug-running into the United States in partnership with the KGB. His signature weapon, a gold-plated .45-calibre revolver with custom-made gold core bullets, has earned him the title 'The Man with the Golden Gun'. He is responsible for the deaths of agents 267 (British Guiana), 398 (Trinidad), 943 (Jamaica) and 768 and 742 (Havana) and for the maiming of 098. Bond's service has evaluated him as one of the finest shots in the world, and M authorizes Bond to assassinate Scaramanga— if he can.

Bond catches up with Scaramanga in Jamaica, where Bond pretends to be a freelance security officer, and Scaramanga hires him to guard an upcoming meeting of gangsters. During the meeting, a KGB officer blows Bond's cover, subsequently pitting Scaramanga and Bond in a shootout. Bond wounds Scaramanga, but before he can finish the gunman off, Scaramanga shoots Bond with a poisoned bullet from his backup weapon, a golden Derringer. Bond returns fire, killing Scaramanga instantly; soon thereafter, a policeman finds the nearly dead Bond in time to save him.

In the novel, British intelligence also has an in-depth psychological profile on Scaramanga, which is printed in the book before the mission begins. The profile (read by M) is unusually disturbing in describing his background and psyche. The profile also claims that Scaramanga is a latent homosexual.

Ian Fleming named Francisco Scaramanga after a fellow student at Eton with whom he shared a lasting rivalry. Following several schoolground spats Fleming decided to use the animosity he felt towards George Scaramanga for the influence behind one of his most famous villains. Fleming and Scaramanga were at Eton in the 1930s until the Bond author was expelled. 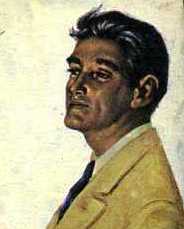 Retrieved from "https://jamesbond.fandom.com/wiki/Francisco_Scaramanga_(Literary)?oldid=85724"
Community content is available under CC-BY-SA unless otherwise noted.