Founder and head of the Sanchez Cartel

Franz Sanchez was a fictional powerful and ruthless Central American drug baron who heads a powerful Central American criminal cartel. He was responsible for the maiming of Felix Leiter and the death of his wife triggering the anger of James Bond. The main antagonist in the 1989 James Bond film, Licence to Kill, he was portrayed by American actor, Robert Davi, and also appeared in John Gardner's accompanying novelisation. Still portrayed by Davi, the character would later be re-imagined for Activision's 2012 James Bond video game, 007 Legends.

Franz Sanchez is a Mexican drug lord running his own empire from the fictitious Republic of Isthmus. Owner of a large luxury estate, protected by an army of henchmen and controller of the city President, Sanchez has either bribed, intimidated or killed most of the government’s officials. Heading an international drugs cartel Sanchez is both ruthless and merciless, yet is cultured, refined and a man of his word. Sanchez rewards loyalty but promises death to anyone who double-crosses him. With paranoid tendencies relating to the loyalty of his men, James Bond is able to exploit this weakness to manipulate Sanchez into killing several of his own men; convincing him of their disloyalty.

Prompted to leave the safety of his lair by the betrayal of his mistress, Lupe Lamora, Sanchez traveled to the Bahamas with his enforcers; catching her in bed with another man, Alvarez. Ordering Dario to cut out the man's heart as an ironic gesture, Sanchez then severely whips her with the tail of a stingray. As Sanchez makes his way back to the nearby airfield, he is intercepted by a DEA team comprised of Felix Leiter and James Bond (ostensibly, as an "observer"). Amid the chaos, Sanchez takes to the air in a stolen Beechcraft 18 and sets course for Cuba. The agents pursue him by helicopter and hook his aircraft in mid-flight, taking him into custody. During Sanchez's transportation to a prison, DEA agent Ed Killifer succumbs to a $2 million dollar bribe and assists the drug lord's escape by driving the prison van into the sea. Scuba divers sent by Sanchez's associate, Milton Krest, then help them make their underwater escape. Meanwhile, his henchmen Dario, Perez and Braun ambush Leiter and his wife Della on the night of their wedding. After repaying Killifer for his loyalty, Sanchez enacts his vengeance on Leiter by having him dunked into a shark tank at Ocean Exotica. When Bond returns to Leiter's house to find Della dead (and it is implied, raped) and Felix alive, but seriously wounded, he swears to take his revenge on Sanchez. Consequently, Bond boards the Wavekrest – a ship owned by Krest – and foils the kingpin's latest drug shipment, stealing five million dollars in the process.

After maiming Leiter, Sanchez is smuggled back to safety in Isthmus, where he acquires four Stinger missiles from the Contras and threatens to shoot down an American airliner if the DEA refuses to back off. He meets with five Asian drug lords as part of his goal of expanding his cocaine empire to incorporate the Pacific region; offering each of the men exclusive franchises in his narcotic product, priced at one million US dollars per territory. Unaware that one of the men is actually a Hong Kong narcotics agent, he reluctantly agrees to takes them on a tour of his main distribution centre. Bond has also traveled to Isthmus on the trail of Sanchez, and after making some winnings in the kingpin's Isthmus casino, he approaches him seeking employment in his organization (introducing himself as a "problem eliminator"). After reconnoitering the establishment, Bond notes that Sanchez is well protected, sitting behind two inches of armored glass. Using plastic explosives, 007 attempts to demolish the window and snipe the drug lord from an adjacent building site. Despite detonating the explosives, two Hong Kong Narcotics officers foil Bond's assassination attempt and take him to their safe house for questioning. Attacking the building with a tank, Sanchez and the Isthmian militia inadvertently rescue Bond and kill the officers, believing them to be the assassins.

Now ingratiated with Sanchez and nursed back to health at his private villa, Bond sets about destroying his operation by turning him against his own employees. Taking advantage of Franz's paranoia (with the aid of informant Pam Bouvier, Q and Lupe Lamora) Bond frames Krest by placing the five million dollars he had stolen into a hyperbaric chamber on board the Wavekrest. A furious Sanchez traps Krest in the chamber and then rapidly depressurizes it with an axe, killing him gruesomely. When Perez asks about the money, Sanchez just tells him to launder it. For Bond's perceived loyalty, Sanchez admits him into his inner circle and takes him to the narcotics refinery along with the Orientals. Bond learns that Sanchez's scientists can dissolve cocaine in gasoline and then sell it disguised as fuel to Asian drug dealers. The buying and selling are conducted via the televangelist Professor Joe Butcher, working under orders from Sanchez's business manager Truman-Lodge. Four tanker trucks loaded with the mixture were prepared for the drug lords (pending their agreement). However, during the presentation Dario recognizes Bond and betrays him to Sanchez. Bond starts a fire in the laboratory and attempts to flee, but is captured, bound by the hands and feet, and placed on a conveyor belt that drops brick-cocaine into a giant shredder.

Sanchez: "[cornering Bond to a rock] You could have had everything."
Bond: "Don't you want to know why? [burns Sanchez to death]"
―Bond and Sanchez's last exchange.[src]

While being fed along the conveyor belt, Bond directs Sanchez's paranoid attention to his head of security, Heller's absence during the fire, stating "That's the last you'll see of Heller and your Stingers". The drug lord finds Heller in the middle of moving the Stingers from his helicopter and tells him to move the Stingers to his car, whilst exchanging a knowing glance at his enforcer Braun. Shortly thereafter, Heller is impaled on the forks of a forklift. Sanchez flees as the fire consumes the facility, taking with him the four articulated tankers; pursued by Bond and Bouvier in a light aircraft. During the course of the chase through the desert, three of the four tankers are destroyed, sending the cartel's profits up in smoke. Sanchez resorts to wastefully using the Stingers against 007, remarking "Don't worry. It's only money". Having failed to kill him, he personally attacks Bond aboard the final remaining tanker, accidentally severing the break line with a machete; causing it to veer out of control and crash down a hill side. Bloodied and soaked in petrol from the leaking tanker, Sanchez raises his blade to kill Bond, lamenting that he "could have had everything" by working under him rather betraying him. The incapacitated agent asks "don't you want to know why?", revealing his cigarette lighter – the Leiters' gift for being the best man at their wedding – and ignites Sanchez's clothing, showing that Bond wants vengeance. Burning, Sanchez stumbles into the wrecked tanker causing a violent explosion which kills him, avenging Felix and Della.

The John Gardner's novelisation provides a little background information for Sanchez, noting in passing that he was so named because of a supposed conjunction between a fascist German woman and a wealthy Panamanian businessman. Furthermore, in the book, Sanchez acquires unidentified prototype missiles instead of Stinger missiles.[1]

Sanchez: "All this? You did all this for an American?"
James Bond: "No.. all this for my friend."
―Bond hurls Felix's lighter at Sanchez, setting him on fire. —

Franz Sanchez also appears in the video game 007 Legends which takes its inspiration from the final act of Licence to Kill. In it, Sanchez is an infamous drug dealer operating out of Mexico and ruling over a vast criminal empire that stretches from North America down into Chile and Argentina; from the poppy fields of Afghanistan, to cocaine processing facilities in Colombia, and counterfeit goods and money laundering in Egypt. Sanchez was drawn to the drug trade from an early age, first raw material production, then refinement and shipping until he eventually became a dealer himself. His ruthless business ethic led him to the top and he now commands the largest drugs cartel in all of Central and South America; cultivating successful business partnerships with gangs from the far east, Russia and central Eurasia. Infamously purchasing information and favor from government officials at a price of one million US dollars, his legitimate business interests include owning a bank in his native Colombia and a casino in the Mexican city of Chihuahua.

Prior to the events of 007 Legends, Sanchez brutally maims James Bond's friend, Felix Leiter, feeding him to a shark and murdering his wife Della. In a flashback sequence, Bond visits Leiter at home, discovering the carnage and pummeling one of Sanchez's thugs. Leiter provides the spy with a cigarette lighter containing intelligence on Sanchez and tells him to warn one of his agents, Pam Bouvier. The pair team up and infiltrate Sanchez's operation; with Bouvier claiming to defect from the DEA, returning $2 million of Sanchez's money the agency had recently seized from a cartel courier. Meanwhile, 007 is officially tasked by MI6 with investigating the drug lord's close ties to a shadowy faction of terrorists based out of the middle east. Operating an enormous narcotics refinery under the cover of an old Otomi temple, Sanchez shows Pam around the laboratories whilst 007 gathers evidence of arms smuggling and plants explosives around the complex. The drug lord discovers her covert listening device, blowing her cover and forcing 007 to detonate the explosives; knocking Sanchez unconscious and pinning Pam under wreckage. Introducing himself to the kingpin as 'a friend of Leiter', Bond beats him before being tackled by his enforcer, Dario. Taking advantage of the chaos, Sanchez flees in a gasoline tanker loaded with his cocaine mixture. Bond and Bouvier pursue him, eventually boarding the tanker and brawling until the vehicle veers out of control and crashes. Staggering through the wreckage, the pair fight until 007 gains the upper hand - knocking him to the ground and hurling Leiter's cigarette lighter at the gasoline-doused drug lord.

"I want you to know that this is nothing personal. It's purely...business."
― Sanchez to Felix Leiter before lowering him in the shark tank.[src]

"Señor Bond, you got big cojones. You come here, to my place, without references, carrying a piece, throwing around a lot of money... but you should know something: nobody saw you come in, so nobody has to see you go out."
― Sanchez to Bond.[src]

"Then I guess it's time to start cutting overhead."
― Sanchez before killing Truman-Lodge.[src]

"You could have had everything. (Bond: Don't you want to know why?)"
― Sanchez to James Bond. Also his last words.[src]

Sanchez about to be torched 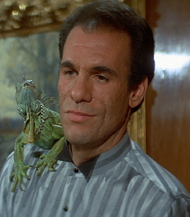 Sanchez and his pet. 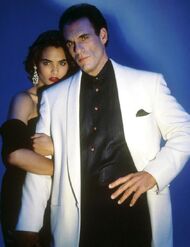 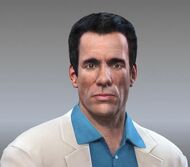