From Russia with Love is a third-person shooter video game published by Electronic Arts. The game is based on the 1963 film film the same name.[1]

Penned by James Bond veteran Bruce Feirstein, the game follows the storyline of the film, albeit adding in new scenes to make the game more action-oriented, as well as changing the affiliation of the main villains. Additionally, it features many elements of later James Bond films to recreate the feel of the era such as the Aston Martin DB5 that debuted in the 1964 film Goldfinger (1964) and the jet pack from the 1965 film Thunderball.[2] From Russia with Love is also notable in that it is the first video game to use Sean Connery's younger likeness as James Bond and the first to include all new voice work by the actor after 22 years off the role.[3]

The game was the last James Bond video game released by Electronic Arts before they lost the rights to Activision in 2006, as well as Sean Connery's last role before retirement and death.

The game begins with a standard pre-title sequence in which Elizabeth Stark, the British Prime Minister's daughter, is kidnapped by the criminal organisation Octopus while attending a party at the Palace of Westminster in London. Fortunately, British Secret Service agent James Bond was assigned to attend the party for just such an event, and he defeats Octopus and rescues Stark. After a title sequence, the action then moves to the grounds of a mansion owned by Octopus, where their assassin Red Grant stalks and garrotes a man posing as Bond. It is revealed that it was all part of a training exercise overseen by Rosa Klebb, a former agent of the KGB who has secretly defected to Octopus. Octopus has devised a plan to embarrass 007 for the off-screen death of their operative Dr. No. The plan involves the theft of a Soviet encoding machine known as the Lektor with the help of a defecting Soviet cipher clerk, Tatiana Romanova. Romanova, however, is being used by Octopus to lure James Bond into a trap; their ultimate goal is to let him obtain the Lektor and then ambush him for it, in the process killing him in a humiliating fashion.

In London, M informs Bond that Romanova has contacted their "Station 'T'" in Turkey, offering to defect with a Lektor – but the clerk said she will only defect to Bond, who she has allegedly become besotted with after reading his intelligence file. Bond then flies to Turkey, where station head Ali Kerim Bey delivers him an Aston Martin DB5 provided by Q Branch. As the pair drive back through Istanbul to Kerim's base of operations they are followed by a Soviet spy, who is blown up by Red Grant using a bazooka. Subsequently they find themselves attacked by the Soviet Army, who assume that they ordered the assassination. After fending off a raid on Station 'T', Bond and Kerim disguise themselves, steal an armed boat from a Russian facility and travel through the ancient cisterns under Istanbul to spy on the Russian consulate. They hear that the Lektor is to be locked in the vault, whilst an attack is mounted by KGB operative Krilencu on Kerim's gypsy allies.

Bond storms the adjacent Russian facility through the underground waterways and steals the plans for the consulate, escaping the cisterns by means of a stolen Russian jet pack. He meets up with Kerim Bey at the gypsy camp and fends off an attack led by Krilencu, during which a stealthy Red Grant saves 007 from narrowly being shot by the KGB operative. The round intended for Bond instead wounds Kerim, leading the pair to hunt down the fleeing Krilencu and kill him. When Bond returns to his hotel suite, he finds Romanova in bed waiting for him and discovers that the Lektor is locked in the consulate vault. She explains that she will meet him the next day at 12:45 in the consulate operations room, where she will provide him with the codes to the vault.

The following day, 007 arrives at the consulate and has Kerim's men create a distraction, allowing him to infiltrate the building. Bond meets up with the girl and the pair make their way to the consulate vault through waves of Soviet troops, who flood the consulate with gas to impede Bond's progress. Eventually they take the Lektor from the vault and, following a high-speed chase in one of Kerim's vehicles, the pair board the Orient Express. It is there that Red Grant gains 007's trust, posing as a British Secret Service operative sent by M to help, and boards the train. He shoots Kerim Bey in his compartment and proceeds to meet with Bond in the dining car. Grant holds him at gunpoint and explains Octopus' scheme to him. After failing to murder 007, Grant unleashes his men on Bond and escapes with Eva Adara and the Lektor device through the Zagreb train station. After a firefight, a defeated Grant stumbles onto the tracks, and is seemingly hit by a train.

Leaving Romanova in the protection of one of Kerim's sons, Bond follows Adara and the Lektor to a Soviet factory and smelting plant which is acting as a front for Octopus' operations. Stealing a jet pack from a downed Octopus pilot, Bond flies through the factory and demolishes the adjacent Octopus warehouses, eventually catching up with the fleeing Adara, who attempts to run him down on a motorbike. He knocks her from her bike and takes the Lektor from her, egressing from the facility in a stolen armoured car. Bond meets up with Tatiana shortly afterwards, pursued by Octopus operatives, and attempts to flee in a stolen patrol boat. The pair make it across the border and reach Venice. At their hotel, Rosa Klebb, disguised as a maid, attempts to steal the Lektor. She gets the drop on Bond, and holds him at gunpoint, but is hit around the head with the Lektor case by Tatiana. Dropping her sidearm, she attempts to kill Bond with a poisoned toe-spike, but ends up being shot by Romanova.

An unspecified amount of time later, Octopus steals a nuclear weapon and threatens to destroy London, unless a ransom of £100,000,000 is paid. Twenty-four hours later, 007 is dropped into Octopus' secretive island launch-site by parachute and attempts to stop their plan by infiltrating their secret base and destroying their organisation. After disarming the warhead, Bond encounters Grant once again in the facility's control centre. The assassin descends from the ceiling in an octopus-like apparatus. Bond attacks the war machine, and it eventually explodes. Grant crawls from the wreckage and, mocking 007's British principles, attempts to shoot him; only to be shot first, avenging slain ally Kerim Bey.

Main article: The controversy over Thunderball

The game was penned by Bond veteran Bruce Feirstein who previously worked on the film scripts for GoldenEye, Tomorrow Never Dies, and The World Is Not Enough, in addition to the script for the 2004 video game, Everything or Nothing. While following the general plot of the 1963 film, one of the most obvious changes to the story for the video game is the absence of the villainous organisation SPECTRE who played a vital role in the film version, but not the novel version of From Russia with Love. At the time of creating the video game adaptation SPECTRE and their leader Ernst Stavro Blofeld had been at the center of a long-standing dispute (initially between writers Kevin McClory and Ian Fleming) over the film rights to Thunderball and its contents. As the SPECTRE name continued to be tied up in the dispute between United Artists/MGM and the now-deceased McClory, the organisation was renamed "Octopus" in the video game and appeared to lack a central leader in the same vein as Blofeld.[4]

From Russia with Love was the first title developed by Electronic Arts Redwood Shores to use an integrated game engine for the 3rd person action and driving segments. It was a new engine that was not based on any of the technology used for previous titles in the series but the result was similar to Id Tech 3.[5]

Unlike its predecessor, Everything Or Nothing, From Russia with Love features a third-person multiplayer deathmatch mode.

On April 5, 2005, Sean Connery was slated to lend his voice and likeness for the game. Connery said "As an artist, I see this as another way to explore the creative process. Video games are an extremely popular form of entertainment today, and I am looking forward to seeing how it all fits together".[6] In an interview with Eurogamer, Singer and songwriter Natasha Bedingfield described how Connery had recorded his dialogue from his home in the Bahamas, with Bedingfield recording her material at Signet Sound, Los Angeles.[7]

The game's soundtrack was composed by Christopher Lennertz. Additionally, Vic Flick, best known for playing the original guitar riff in The James Bond Theme announced that he contributed to Lennertz's score.

Many of the cast from the film, From Russia with Love, return in likeness. Sean Connery, the first official actor to portray James Bond in the EON Productions film series returned to the role for the first time in 22 years (previously the unofficial 1983 film, Never Say Never Again). Connery not only allowed for his likeness of Bond to be used (appropriately from the 1963 film), but also recorded all new voice work for the character. By the time of the game's production, he was one of the only surviving main cast members; Daniela Bianchi, also still alive, had retired from acting in the 1970s and her voice in the original film had been overdubbed anyway.

The introduction of James Bond in the game's first cutscene.

The Octopus insignia on an air-to-surface missile.

Krilencu (with the likeness of Fred Haggerty) attacks the gypsy camp. 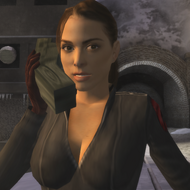 Eva Adara orders the rail tunnel to be collapsed upon the escaping Bond.

Adara in the cockpit that subsequently becomes her tomb.

Eva seconds before colliding with the hangar doors.

Grant reveals himself in an octopus-like war machine.

Grant challenges 007 to kill him, mocking his English values.

Bond holds Grant at gunpoint with his Durangov pistol.

Bond walks away from the machine wreckage, having avenged Kerim Bey. 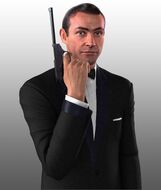 Bond as he appears in promotional stills.

Red Grant in his official artwork

Concept art of an Octopus soldier, 'heavy', and sniper.

Concept art of a Soviet soldier

Concept art of a cut Istanbul non-hostile npc. Removed because the game was unable to host another model skeleton. 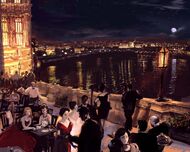