Armed Forces of the Russian Federation,

General Golgov was a fictional Russian military general and the head of a shadowy arms smuggling cartel. He functioned as the primary antagonist of the 1998 James Bond video-game, James Bond 007, for the Nintendo Game Boy.

Dissatisfied with the direction of global politics following the collapse of the Soviet Union, Russian General Golgov was responsible for setting up an arms smuggling ring; amassing an army to crush the West in retaliation for Russian nuclear disarmament. James Bond follows the smuggling pipeline to arms dealer, Oddjob, and later to Kurdistan. Pawns in the General's plans, the rebel leaders, Sadam and Khatar, were subsequently used by him to destabilise Kurdistan and make it ripe for invasion. Bond foils his plans in Kurdistan and infiltrates Golgov's hidden base in central Russia. He finds that the General has captured ally, Zhong Mae, and tied her to one of his five nuclear missiles. Bond confronts Golgov, who attacks him in an armed mechanical suit. 007 defeats him, but the General triggers the launch sequence for the missiles with his dying breath. Bond subsequently disarms the weapons. 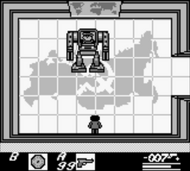 Retrieved from "https://jamesbond.fandom.com/wiki/General_Golgov?oldid=90808"
Community content is available under CC-BY-SA unless otherwise noted.