General Arkady Grigorovich Ourumov (In Russian: Аркадий Григорович Урумов) is the fictional commander of the Russian Space Division, a member of the Janus Syndicate and the tertiary antagonist of the 1995 James Bond film GoldenEye. Portrayed by the late German actor Gottfried John, the character would later appear in the 1997 video game GoldenEye 007, also as an antagonist.

In 1968, at the age of 18, he graduated from Moscow Military Academy. In 1970, he graduated from the School of Applied Military Science in Kiev. Later that year, he was promoted to Captain and was posted to an advanced Army Missile Test Range from 1970 to 1975.

In 1986, Ourumov, who had grown tiresome of having little power, was finally promoted to Colonel and was given the important job of being in charge of a Soviet Russian Chemical Weapons Factory. During his early days in his new position he meets a young and bitter Alec Trevelyan, who tells Ourumov of his past, his hatred for MI6 and his future intentions, but making sure to leave out a few vital details about himself. Alec offers Ourumov a part in his plan and that he will be paid well and receive his status as the next "Iron Man Of Russia", Ourumov graciously accepts. The two pledge not to see each other until Alec Trevelyan and James Bond were to go on a mission to destroy Ourumov's base. However, Ourumov and Trevelyan had different plans. Trevelyan deliberately gets himself caught by Ourumov and his men, and Bond witnesses Ourumov shooting Trevelyan in the head. Ourumov attempts to catch Bond and almost succeeds, but Bond just manages to escape.

The shooting was staged, however. Unbeknownst to Bond, Alec is alive, albeit deeply scarred on the right side of his face. He becomes an international terrorist under the name "Janus" (The two-faced Roman god). A disgraced Ourumov was later court-martialed for the destruction of the Arkangelsk chemical facility and facing the likely fate of a death sentence. However, Colonel Ourumov perjured himself by claiming one of his deceased underlings had failed to take precaution in caring for the chemical vats which caused the explosion. This explanation is bought by the Soviet command, and Ourumov is cleared of all charges and restored to position. Some time later, Colonel Ourumov receives a general's promotion and a new assignment with increased prestige: commander of the Severnaya Space Facility in Siberia. Ourumov also has the job of employing another member for The Janus Crime Syndicate - he hires Xenia Onatopp, an ex-Soviet fighter pilot, whom he is familiar with. For the next nine years The Janus Crime Syndicate would terrorize Russia without getting caught and all their identities remaining secret and Ourumov was earning more power, which was starting to trouble the Russian Government.

In 1995, the general completes the establishment of their syndicate's greatest weapon: "GoldenEye". Two GoldenEye satellite dishes were built: one in Siberia, and one hidden in Cuba. Anyone who became suspicious of Ourumov ended up dead at the hands, or perhaps the thighs, of Xenia.

The Syndicate's first act is the theft of the Tiger helicopter - Ourumov and Xenia personally took care of the operation under the strict order of Janus not to fail. They successfully manage to steal it before Bond can stop them, and arrive in Siberia hours later where the second act of their operation would take place. Ourumov made sure to hire the most intelligent computer programmer to take care of the GoldenEye weapon: Boris Grishenko. Ourumov and Xenia enter the satellite base where the corrupt general orders one of his men to give him the GoldenEye and authorization codes they need to testfire the GoldenEye. Upon receiving these, Xenia suddenly shoots everyone in the base, and together they arm the GoldenEye to fire on Severnaya in order to eliminate the evidence. However, one employee of the Severnaya facility, Natalya Simonova, was in the break lounge at the time of the shooting and spared the massacre. Her hiding is almost discovered by Ourumov, but the noises heard are chalked up to another surviving employee who covertly activates an alarm, then is quickly shot again by Xenia.

Ourumov and Xenia take Boris with them and escape moments before the GoldenEye weapon detonates. Meanwhile, at a Russian air base two hundred kilometers away, the activated alarm is heard and three pilots are ordered to fly to Severnaya to thwart any attackers. However, the electromagnetic storm that fires on Severnaya fries the circuitry in the MiGs, causing all three pilots to be killed with one crashing into the radar dish at the facility. Natalya survives by hiding in a cupboard then escaping into the tundra, calling for Boris. As this is happening, Xenia and Ourumov are protected from the EMP blast by their stolen helicopter. Afterwards, Ourumov proceeds to Saint Petersburg to report to Defence Minister Dmitri Mishkin. Ourumov blames the Severnaya attack on Siberian separatists and resigns his command of the program due to his apparent failure to stop this, but is then shocked to learn that Simonova is alive and he leaves immediately, frustrated with Xenia's failure to kill "everyone". He assigns Boris and Xenia to find her, which doesn't take them long. Ourumov takes Simonova to Alec's hideout, where he ties her up in the Tiger helicopter to await her death. Bond also ends up in the helicopter, moments after learning that Trevelyan is alive and that he is a traitor. Bond and Natalya escape moments before the Tiger helicopter's heat-seeking missiles fire back on itself, but they are soon caught by Russian troops and taken to the military intelligence archives and locked in a prison cell.

Later, upon hearing that Dimitri Mishkin has Bond and Natalya in custody, Ourumov arrives and storms into the cell where Mishkin is interrogating the pair. Ourumov argues with Mishkin, trying to convince him that Bond is the traitor. Believing Natalya's story concerning Ourumov's treachery, Mishkin yells for a guard to arrest him, but the general quickly shoots Mishkin's bodyguard and then Mishkin himself with Bond's gun. After improvising a cover story, Ourumov then calls for the guards to kill Bond and Simonova. However, the spy hurls a chair into Ourumov's legs and struggles him, then throws him headlong into a wall. While he's dazed, Bond takes on two soldiers who enter the cell, then arms himself before escaping with Simonova. Ourumov leads his soldiers throughout the archives, searching for the pair. Ourumov's men manage to capture Simonova, leaving Bond to escape on his own. Ourumov takes her and one of his men and they escape out onto the streets of St. Petersburg by car, but Bond hijacks a tank and suddenly bursts through a wall in pursuit. He leaves a path of destruction behind him as he chases Ourumov through the busy roads, but the general soon arrives at Alec's converted missile train.

Ourumov boards the train with Simonova, and explains to Alec that Bond has escaped. Later, their journey is halted by Bond, who uses the hijacked tank to stop the train. He then boards the damaged train and holds Trevelyan and Xenia at gunpoint. Ourumov is called into the room, holding a gun to Simonova's head. Bond reveals to Ourumov that Alec is a Lienz Cossack, leaving Ourumov shocked - however, Trevelyan smooths things over by telling him how rich and powerful he will soon be. He then nods for Ourumov to shoot Simonova, but his real intention is for Ourumov to distract Bond while he and Xenia escape, turning the general into a sacrificial lamb. At this point, Ourumov is too slow and ends up being shot to his death by Bond's Kalashnikov, thereby putting an end to the "Iron Man Of Russia"'s life.

During his time as a soldier, Ourumov's T55 tank was attacked by another tank. Ourumov was the only survivor, and the accident left him with a fear of tanks. After his Military Career, he worked as the overseer of the chemical facility near Archangel port, where he met Janus before the laboratory's destruction, and his promotion. He was given a position in the Russian Ministry of Defense, and was placed in charge of the GoldenEye weapon. However, he began to work with the crime boss Janus to help him steal the GoldenEye. Ourumov and Xenia Onatopp were sent to Monacco to steal the experimental Tigre helicopter. They then took it to the Severnaya facility, and set the GoldenEye that was stored there to destroy it before stealing the device, and flying away. After reporting the attack as the work of Siberian Separatists to Minister of Defense Viktor Mishkin, he was informed that a Severnaya worker had escaped. After trying desperately to find this one person who may have seen him at the facility before detonation, he discovered that James Bond and the programmer Natalya Simonova were being interrogated by Mishkin. Ourumov burst in on the interrogation to defend himself against any possible hints that he was not loyal to Russia, and killed Mishkin before capturing Simonova and taking her to Janus. On the way, Bond chased them through St. Petersburg in a tank. After arriving at Janus' trainyard Ourumov killed the driver of his car and handed Natalya off to Xenia. Ourumov then guarded Simonova on the short journey before he was called to bring her to another car. There James Bond informed him that Janus was a Cossack. This caused Ourumov to question his loyalties before being shot in the head by the escaping Janus. 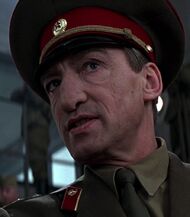 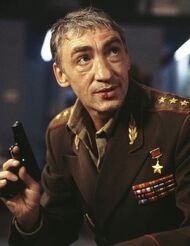 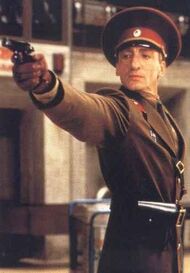 Gottfried John's General Ourumov in GoldenEye 007.
Add a photo to this gallery

Retrieved from "https://jamesbond.fandom.com/wiki/General_Ourumov_(Gottfried_John)?oldid=98773"
Community content is available under CC-BY-SA unless otherwise noted.