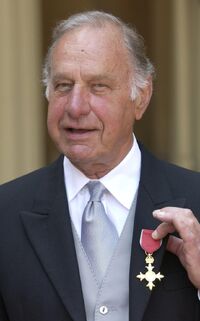 Palmer is best known for his roles in British television sitcoms playing Jimmy Anderson in The Fall and Rise of Reginald Perrin, Ben Parkinson in Butterflies and Lionel Hardcastle in As Time Goes By.

Retrieved from "https://jamesbond.fandom.com/wiki/Geoffrey_Palmer?oldid=99866"
Community content is available under CC-BY-SA unless otherwise noted.