After reporting to an MI6 base in Brazil, Bond is provided with a modified Glastron Carlson CV23HT and travels the Amazon River looking for Hugo Drax's research facility. There, he encounters Jaws and other henchmen; a speedboat chase develops. Bond escapes from his boat just before it hits the Iguazu Falls, utilizing a concealed paraglider. The boat plummets over the edge of the waterfall and is presumed destroyed.

Iguazu Falls was a natural location depicted in the film, although as stated by Q in the film, the falls were intended to be located somewhere in the upper basin of the Amazon River rather than where the falls are actually located in the south of Brazil. The second unit had originally planned on sending an actual boat over the falls.[2] However, on attempting to release it, the boat became firmly embedded on rocks near the edge. Despite a dangerous attempt by helicopter and rope ladder to retrieve it, the plan had to be abandoned, forcing the second unit to use a miniature at Pinewood Studios instead.[2] In total, three (some sources are declaring four) boats were assigned for Moonraker with special paint - silver metalflake gelcoat over gray. Only one original boat survived and is owned by the Ian Fleming Foundation.[1]

The Carlson's hidden equipment were armed and operated by switches on a pull-out drawer to the left of the steering wheel. 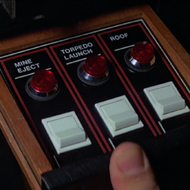 Retrieved from "https://jamesbond.fandom.com/wiki/Glastron_Carlson_CV23HT?oldid=83158"
Community content is available under CC-BY-SA unless otherwise noted.