Gobinda was Kamal Khan's primary and most loyal henchman. A major antagonist portrayed by Indian actor, Kabir Bedi, and doubled by stuntman, BJ Worth[1], the character first appeared in the 1983 James Bond film, Octopussy.

Gobinda is generally seen accompanying Kamal Khan wherever he goes, and performing various other duties, mainly security based. British agent James Bond first spies the tall, imposing man when Gobinda is acting as chauffeur for Khan and his henchwoman Magda in a street after the Sotheby's auction. Later in India, it is clear Gobinda means business when he destroys the rigged dice after Bond defeats Kamal in a game of backgammon at the hotel casino. Then later, he and Khan's other henchmen chase Bond and his Indian ally, Vijay, through the streets of Delhi driving tuk-tuks and try unsuccessfully to shoot 007 and Vijay. Ultimately the goon captures Bond after Magda seduces the spy and steals the real Fabergé egg. He takes the agent to stay as Kahn's 'guest' at the Monsoon Palace, where 007 finds out that Khan is working with General Orlov.

Later, Gobinda fights Bond on Octopussy's train in Germany but fails in killing him when the British falls off the train. He notices 007 when they are leaving the circus and informs Khan, who says to let their enemy keep going and that he will soon die in the explosion. However, Bond and Octopussy manage to deactivate the bomb and return to India to attack Kamal Khan. During the assault on and in Khan's palace, Octopussy gets captured by Khan and Gobinda, who escape the palace and into a plane. Bond follows them and jumps on the plane, disabling one of its engines in the process. Khan so instructs Gobinda to fight 007 atop the plane, albeit understandably with some reluctance. His reluctance was with good concern, as that was a very risky venture that ultimately led to Gobinda's doom. Bond figured he was outmatched and wing-walking makes a poor choice for a battleground. While Gobinda is attempting to grab Bond, 007 pulls back the plane's antenna and snaps it at Gobinda's head. Gobinda screams in pain due to the blistering sting of the antenna's snap, and it also causes him to loosen his arm's grip on the fuselage, causing him to fall to his death. 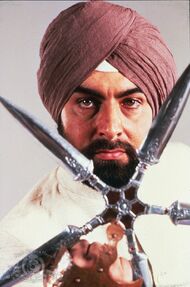 Gobinda falls to his death.