"Creates a pulse or a radiation surge that destroys everything with an electronic circuit."
― M

The GoldenEye was a fictional electro-magnetic orbital weapon developed by the Soviet Union during the Cold War. GoldenEye was subsequently hijacked by the Janus Syndicate from its Russian control facility at Severnaya, Russia and was instrumental in Alec Trevelyan's vengeful plot to decimate Britain's financial economy. The weapon first appeared in the 1995 James Bond film GoldenEye and also featured in the film's novelisation, 1997 video-game and 2010 re-imagined video-game.

A collection of equipment made up the GoldenEye, each playing an intricate part in the use of the weapon. Firstly, the weapon consisted of two disposable satellites designated "Petya" and "Mischa", each one armed with a nuclear warhead. By detonating the device in the upper atmosphere, a pulse or a radiation surge, is generated; capable of destroying all electronic devices in a 30 mile radius. Consequently, eliminating all forms of electronic communication or retaliation.

In order to activate the the satellites, three keys were needed; two conventional golden keys were used to start the system's targeting network. The third key, a large rectangular cartridge that housed an optical disc and translucent golden gem, was used to read the system's complex access and firing codes. In order to obtain the three keys, an authorization code was needed to unlock the eye shaped vault where they rested. After the cartridge key was loaded into the console, the golden keys needed to be turned with precise synchronization to activate the targeting system. With the target coordinates set, the weapon needed to be manually armed by entering the firing codes. After unlocking yet another compartment, the system would be ready to fire once the trigger switch was turned.

The GoldenEye was kept locked away by the Russian Defense ministry at a supposedly abandoned radar station at Severnaya, in the middle of northern Russia. Deep beneath the control center however, was the GoldenEye's heavily guarded terminal room. Despite being home to the world's most high-tech weapon, the facility itself was rather crude and obsolete. Due to the secretive nature of the weapons program, the staff at the Severnaya station was minimal; among these employees were Boris Grishenko and Natalya Simonova. The facility and most of it's staff ultimately met their end when General Ourumov and Xenia Onatopp infiltrated the base and stole the keys, detonating the first of the satellites over the complex.

A second station was secretly constructed within the heart of the Cuban jungle, it's existence remained hidden even from the entire body of the Russian Defense Council. The location of the duplicate facility was unbeknown to even the Severnaya staff; the only individuals who knew of it's whereabouts were General Ourumov and his Janus associates. The Cuban Station was far more elaborate than Severnaya, possessing a massive antenna dish that dwarfed it's Siberian counterpart. Inside the facility, there was a state-of-the-art terminal room. Adorning the wall of the control room was an enormous video screen that displayed a coordinate world map, as well as other specs of the GoldenEye's designated target.

In order to avoid detection from spy satellites or the naked eye, the antenna dish was capable of being flooded, effectively disguising itself as a mere lake. Trevelyan also managed to keep the compound heavily guarded with a veritable army of his Janus operatives, constantly having them around the perimeter, concentrated within the terminal room, and even having two helicopter gunships patrol the sky above. Along with Trevelyan's forces, the base itself also had it's own built in defense systems, including hidden missile turrets that were capable of swatting down enemy aircraft. The Cuban facility wound up being destroyed as well, this time by Bond himself as he was able to destroy both the central control terminal and sabotage the radar antenna.

During the course of the film, the weapon is hijacked by the Janus crime syndicate. After infiltrating the Severnaya facility, they massacre the technicians and steal the control disk for the weapon. To cover their tracks, they program one of the GoldenEye satellites (Petya) to destroy the complex with an electromagnetic pulse. With the control key and a duplicate control center in Cuba, Alec Trevelyan planned to steal money from the Bank of England before erasing all of its financial records with the remaining GoldenEye, concealing the theft and destroying Britain's economy.

During the final confrontation with Bond, a survivor and programmer from the Severnaya facility, Natalya Simonova, programs the satellite to initiate atmospheric re-entry and destroy itself. Despite Janus employee Boris Grishenko's best efforts to prevent it, the Mischa satellite burns up harmlessly in the Earth's atmosphere during the film's climax.

Nightfire features a multiplayer scenario titled "GoldenEye Strike" which involves two teams scrambling to find both the GoldenEye key and disc, in order to fire the EMP on the opposing team and score points.

Inserting the control key in GoldenEye (1995). 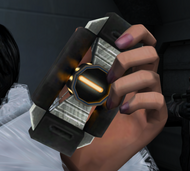 GoldenEye controller card, as re-imagined in the game GoldenEye 007 (2010).

GoldenEye satellite, as re-imagined in the game GoldenEye 007 (2010).
Add a photo to this gallery

Retrieved from "https://jamesbond.fandom.com/wiki/GoldenEye_(weapon)?oldid=104075"
Community content is available under CC-BY-SA unless otherwise noted.