GoldenEye 007 is a single-player handheld electronic LCD video game that was developed and released by Tiger Electronics circa 1995-98 to coincide with the 1995 James Bond film of the same name. Two different GoldenEye-themed games were released by Tiger: a sideways-moving game in a conventional handset form factor and a 'grip games' vertical shooter featuring hardware resembling a pistol grip.

Both game variants are based on the 1995 James Bond film GoldenEye and loosely follow its plot. Due to their rudimentary design, neither game is capable of a fleshed-out story, although details are covered in their respective instruction manuals. In both James Bond is sent to prevent his former friend Alec Trevelyan from using the GoldenEye satellite weapon to cripple Europe.

The game-pad variant of Tiger Electronics' GoldenEye 007 utilizes their standard form-factor of a centrally-located LCD screen, flanked by directional controls and action buttons (kick, Q, punch and fire) in the lower left and right hand sides, respectively. Underneath the display are off, sound, pause and start/on keys. Players move left and right attacking enemies by kicking, punching or shooting (both on foot and using a tank). The character can jump with 'up' (apparently intended to be Q's rappelling belt-buckle), but the 'down' arrow key does nothing. A more powerful attack is also available in the form of a Q-Branch class-4 pen grenade which can wipe out all enemies currently on the screen. There are five stages, during which 007 confronts assassin Xenia Onatopp and drives a tank (which can 'move' to three different sprite locations in the left, middle and right of the screen). As with the 'Grip games' variant, all the game's graphics are fixed in place. Illusion of movement is created by sequentially flashing objects between their possible states. Backgrounds for the games are static drawings, layered behind the "moving" graphics which are transparent when not in use.

Part of Tiger Electronics' "grip games" line-up, the grip variant is a vertical shooter featuring hardware resembling a pistol grip, powered by four AAA batteries. The grip's trigger is used for firing/start, with on/off, sound, reset, and directional controls on the rear, facing the player. On top of the device, above the direction-pad, is a single square LCD display. The player must run up the screen, shooting a required number of enemies with one of four different collectible firearms - a silenced .22 pistol (unlimited ammunition), another pistol (6 shots), shotgun (6 shots), and a machine gun (15 shots). To reload a weapon players shoot the 007 symbol in the middle of the screen. Like the game-pad variant, both feature 5 stages set against the same background (with occasional building sprites representing location-specific details). The game culminates with Bond literally shooting down the GoldenEye satellite and killing Alec Trevelyan.[1] 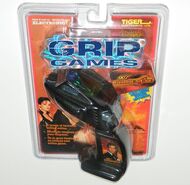 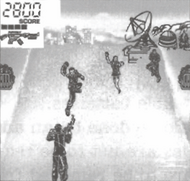 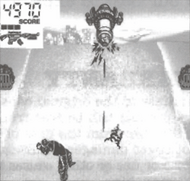 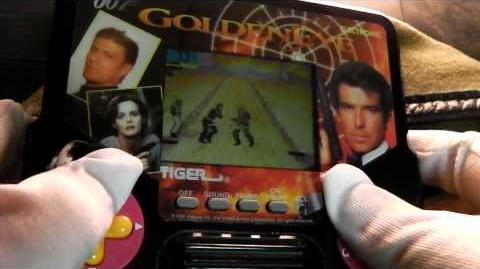