James Bond Wiki
Register
Don't have an account?
Sign In
Advertisement
in: Weapons, Gadgets, The Man with the Golden Gun weapons,
and 10 more

Disassembles into a pen, lighter, cigarette case and a cufflink

"One golden shot means another poor victim has come to a glittering end."
― The Golden Gun described in the film's opening song[src]

The Golden Gun is the signature weapon of killer assassin Francisco Scaramanga. It first appeared as the titular weapon in Ian Fleming's posthumously published 1965 novel, The Man with the Golden Gun. In the novel it is merely a gold-plated .45-calibre revolver. In the 1974 film adaptation, the weapon is a custom-built, single-shot pistol assembled from four seemingly innocuous golden objects: a pen, a lighter, a cigarette case and a cufflink. Its popularity led to appearances in most of the James Bond video games.

In Ian Fleming's novel, the Golden Gun is a gold-plated Colt. 45 that carried gold dum-dum bullets with silver jackets. Scaramanga also carried a golden derringer whose bullet was coated with snake venom, as a backup weapon.

For the film, it is a single-shot weapon that fires a custom-made 4.2-millimeter (.165 calibre) golden (23-carat gold with traces of nickel) dum-dum bullet. Scaramanga used the Golden Gun in numerous assassinations of officials, political enemies, gangsters, and even a 00-Agent, Bill Fairbanks (002). Scaramanga later used the Golden Gun to kill British scientist Gibson and his own employer, Hai Fat. When Scaramanga was killed after losing a gun duel with James Bond, and his island destroyed, the Golden Gun was presumably also lost.

To evade security, the pistol can be assembled and disassembled into its component parts:

Francisco Scaramanga's weapon, the Golden Gun, was initially added to the Egyptian level and multiplayer portion of the Nintendo 64 video game GoldenEye 007. Due to its popularity it was also added into subsequent James Bond games The World is Not Enough, Agent Under Fire, Nightfire, Everything or Nothing, GoldenEye: Rogue Agent, From Russia with Love, Quantum of Solace, the 2010 remake of GoldenEye 007, and 007 Legends.

In The World is Not Enough for the Nintendo 64, the gun must be assembled from the pen, lighter, and case pieces before it can be used. In each of the games it is featured in (except Everything or Nothing and the single player portion of Agent Under Fire), the Golden Gun count for an instant kill, which reflects that Scaramanga never missed, although in the games the player can miss, and because of this, the Golden Gun is not available in single player mode (except N64 Goldeneye 007 and Everything or Nothing), but golden versions of the game's standard weapon(s) are usually available (such as a golden Walther PPK, P99 and Desert Eagle). 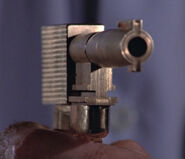 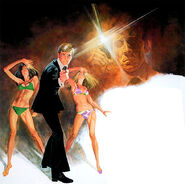 The Golden in the 2010 GoldenEye Videogame's Multiplayer mode.

The Golden Gun in 007 Legends 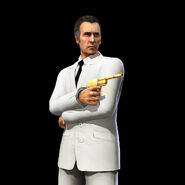