The Living Daylights (film)
Green Four is the call-sign of a fictional security operative and butler present during Georgi Koskov's debriefing at Blayden House. He appears in the 1987 James Bond film The Living Daylights and was played by stuntman Bill Weston.

The character is first introduced during James Bond's arrival at Blayden House. As Koskov's debriefing concludes, 'Green Four' enters the kitchen to discover a Soviet Assassin, Necros, dumping the cook's body into a chest freezer. Reaching for his radio, he utters "Green Four to base-" before having the device kicked from his hand. The butler engages Necros in hand-to-hand combat, blocking a shot from a rolling pin and thwarting the assassin's use of an electric carving knife by yanking out the knife's plug. Holding him over the oven, Necros forces the butler's face onto the hot grill before having a fist-full of flour thrown into his eyes. Viciously brawling around the room, Necros makes a second attempt with a knife, before reaching for a saucepan of boiling water. Green Four narrowly avoids the scalding water before the assassin inflicts a series of strong kicks, eventually resulting in him being knocked out by a blow from a frying pan.

According to Andreas Wisniewski, who played the role of Necros, the fight scene took three days to film. In the course of filming the scene Weston broke a finger and was accidentally knocked unconscious on one occasion by Wisniewski.[1] 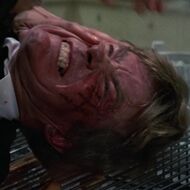 Retrieved from "https://jamesbond.fandom.com/wiki/Green_Four?oldid=99572"
Community content is available under CC-BY-SA unless otherwise noted.