"We can hardly be expected to stop a coup we know nothing about."
― Beam signaling his allegiance to Greene.[src]

A high-ranking intelligence operative working for the CIA, Gregg Beam negotiated a deal with Dominic Greene to ignore his orchestrated coup in Bolivia in exchange for oil, which the section chief assumed Greene had discovered; incorrectly interpreting Greene's bulk purchase of water piping. A cynical pragmatist, Beam is quite comfortable working alongside Greene and other unpleasant figures, unlike his conscientious and frustrated subordinate, Felix Leiter.

While waiting for Greene on-board a private jet in Haiti, Beam is contacted by M about him. He casually dismisses her inquiry, lying that the CIA have no interest in him. Beam and Leiter travel with the Quantum representatives to Austria. While discussing their business arrangements, Greene mentions that he has a 'pest' he would like eliminated as part of the deal. Beam glances at the photo of James Bond and passes it to Leiter, duplicitously asking him to identify it. When Leiter lies to the men, Beam identifies Bond and tells Greene he will deal with him. Later in La Paz, 007 phones Leiter at their front office, Incan Exports, and arranges a meeting. Beam sends his men after Bond to kill him. However, Felix (being a close friend of Bond and disgusted by Beam's corruption) manages to warn the spy, who evades his pursuers. Following Greene's demise, Beam is exposed for his crimes and Leiter replaces him as section chief. 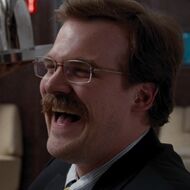