Special Advisor to the Prime Minister

Guy Haines is a fictional special advisor to the British Prime Minister and, unbeknowst to the international authorities, a high-ranking member of the criminal organization, Quantum. A minor antagonist portrayed by the late British actor, Paul Ritter, the character appeared briefly in the 2008 James Bond film, Quantum of Solace, and would later appear in the tie-in video game of the same name, voiced by Adam Godley.

Guy Haines is one of the attendees at a meeting of Quantum which takes place during a performance of Tosca at an opera house in Bregenz, Austria. He seems to have particular sway on their relations with the Americans, as indicated by his insistence that he'll deal with the CIA after they cheat them out of the Bolivian water monopoly. Bond identifies Haines as one of Quantum's members and chases after his bodyguard, who has been assigned to him by Special Branch, believing him to be associated with Quantum. 007 throws him off the roof and he is shot on Dominic Greene's orders, to prevent the man from identifying him as a member of Quantum.

Though unused in the final cut of Quantum of Solace, a closing scene was shot where Bond arrived at Guy Haines' estate. In this scene Bond kills co-conspirator Mr. White and begins to interrogate Haines about Quantum; instead the producers chose to use the traditional gunbarrel sequence at the end of the film instead of this scene. This deleted scene was withheld from the Quantum of Solace DVD releases and remains unseen by the public.

The final scene at the end of the Quantum of Solace video game shows Bond arriving outside Haines' estate. Inside Haines and Mr. White are shown to have access to the MI6 computer and its information regarding Quantum.

The deleted scene from Quantum of Solace featuring White and Haines is no longer canon due to Mr White's appearance and death in Spectre. 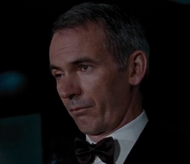 Retrieved from "https://jamesbond.fandom.com/wiki/Guy_Haines?oldid=101571"
Community content is available under CC-BY-SA unless otherwise noted.