Hans was a fictional personal bodyguard to SPECTRE mastermind Ernst Stavro Blofeld. A silent, tall (6 ft 8 inches), muscular blond man wearing an all-black outfit, the character appears as a supporting antagonist in the 1967 James Bond film You Only Live Twice, portrayed by British actor, Ronald Rich, and doubled by stuntman, Joe Robinson.[1] The character was credited simply as "Blofeld's Bodyguard".

Hans is introduced during the first volcano lair scene. During a meeting between Blofeld and SPECTRE's Asian investors, who are paying him to start a war between Russia and the United States of America, Hans is shown feeding Blofeld's pet piranhas. He is also present during the execution of Helga Brandt by the same piranhas. When James Bond is captured and brought before Blofeld in the control room, Hans moves to stand between his master and 007, effectively blocking Blofeld's face from the camera's view, as per Blofeld's previous film appearances. However Blofeld makes Hans step aside, revealing his scarred visage to Bond for the first time. During the assault on the volcano lair by Tiger Tanaka's ninja strike force, Blofeld opts to escape with his life. Rather than accompany Blofeld, Hans is commanded to remain behind and blow up SPECTRE's spacecraft, Bird 1, after it intercepts and captures the orbiting American vessel. Hans dutifully obeys, and brawls with Bond in Blofeld's personal quarters when the British agent attempts to gain access to the control room and the spacecraft's self-destruct switch. 007 snatches the destruct key from Hans' pocket and runs for the bridge over the Piranha pool. After a missed punch Bond flips Hans over his shoulder into the pool, remarking "Bon appetit!".

As played by Ronald Rich, Hans' appearance as an imposingly tall, tough, steel-eyed blond enforcer recalls Robert Shaw's characterization of the menacing and ruthless blond SPECTRE assassin, Red Grant in 1963's From Russia with Love. Esquire Magazine ranked Hans #41 in the list of James Bond Villains, saying, "As a character, Hans doesn't offer much. As an obstacle, he's terrific.[2] Lewis Gilbert directed Rich in both Alfie and You Only Live Twice.[3] 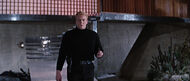 Hans is devoured by Blofeld's pet piranhas.
Add a photo to this gallery

Retrieved from "https://jamesbond.fandom.com/wiki/Hans_(Ronald_Rich)?oldid=99417"
Community content is available under CC-BY-SA unless otherwise noted.