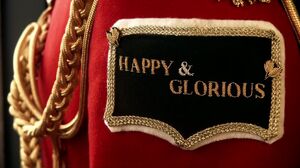 Happy & Glorious (named after a line in God Save the Queen) is a short film directed by Danny Boyle and produced by the BBC that was part of the 2012 Summer Olympics opening ceremony titled Isles of Wonder that took place on July 27 in London. It features Daniel Craig as James Bond and Queen Elizabeth II as herself. It was later uploaded to the official Olympics Games YouTube channel (simply called Olympics) on the same day as the video "James Bond and The Queen London 2012 Performance".

James Bond enters the front gate of Buckingham Palace in a London black cab. His entrance (accompanied by an arrangement of Handel's "The Arrival of the Queen of Sheba") is noticed by Brazilian children (a nod to Rio de Janeiro, the next summer Games host city) in the throne room. Bond escorts Queen Elizabeth II (who played herself, acknowledging Bond with the words, "Good evening, Mr. Bond") out of the building and into a waiting AgustaWestland AW139 helicopter.

The helicopter flies across London, above the cheers of a crowd on The Mall, past Nelson's Column, doubling back to the Palace of Westminster with an animated Winston Churchill statue in Parliament Square, and then along the Thames past the London Eye, St Paul's Cathedral, the financial district City of London (with 30 St Mary Axe in the background), and then passes through Tower Bridge, accompanied by the Dambusters March.

The film finishes with Bond and the Queen apparently jumping from a helicopter live above the stadium with Union Jack parachutes (famously used by Bond in The Spy Who Loved Me) accompanied by the James Bond Theme. The Queen and the Duke of Edinburgh, along with Jacques Rogge, are then introduced to the audience, the Queen wearing the same dress as in the film, as if she had just arrived with Bond.

The Arrival of the Queen of Sheba

For the scenes with the helicopter, the Queen was doubled by actress Julia McKenzie, and for the parachute jump by BASE jumper and stuntman Gary Connery wearing a dress, hat, jewellery and with a handbag. Bond was played by Mark Sutton. The helicopter had flown to the stadium from Stapleford Aerodrome in Essex.

The Union Flag was then raised by members of Her Majesty's Armed Forces, while the first and third verses of the national anthem were performed a cappella by the Kaos Signing Choir for Deaf and Hearing Children.

Retrieved from "https://jamesbond.fandom.com/wiki/Happy_%26_Glorious?oldid=68427"
Community content is available under CC-BY-SA unless otherwise noted.