Helga Brandt (also known as Number 11) was the fictional personal assistant to Japanese industrialist, Mr. Osato, and a member of the secretive criminal organisation, SPECTRE. A supporting antagonist portrayed by the late German actress, Karin Dor, she appeared in the 1967 James Bond film, You Only Live Twice. To date, across the franchise as a whole, there have been four individuals who have held the number "11".

Little is known about Helga Brandt, the mysterious, red-haired, young femme fatale who was known within SPECTRE as 'number eleven'. She is a gorgeous German woman in her late 20's who, at some point prior to You Only Live Twice, inherited the SPECTRE designation from her Thunderball predecessor. By the time of the film's events, she ostensibly works for Japanese industrialist Mr. Osato as a secretary, but she is rather assuming the role of an abused handywoman for the SPECTRE, as she is asked by her bosses to be a smiling confidential secretary, a waitress, a pilot, and even a torturer and assassin. Due to her very low rank in the organization, she is constantly ordered to do all the dirty and thankless work that she doesn't have the right to fail, as she knows that the slightest error could cost her a very severe punishment from her hierarchy. Despite being very serious and devoted, this pretty and stylish German girl seems to have a quite selfish personality and sometimes allows herself to seduce and enjoy herself during her job if she is given the opportunity out of sight of her bosses.

Miss Brandt is first encountered by James Bond (posing as Mr. Fisher, the new managing director of Empire Chemicals) during his scheduled meeting with Osato, wearing a bright orange blouse and white high heels. Arriving by helicopter, Osato introduces himself and his 'confidential secretary', who proceeds to offer Bond a glass of champagne. As she prepares drinks, Osato interviews Bond and covertly x-rays his chest, revealing his Walther PPK. He reprimands Bond's smoking habit, to which Brandt adds "Mr. Osato believes in a healthy chest", as she bends down to serve him. She proceeds to take notes during the interview. After 007 leaves, Osato turns to her and orders her to kill him; prompting her to pick up the nearby telephone and arrange for a car-load of assassins to intercept Bond outside. The attempt on his life fails.

Later, at the Kobe docks, Bond is captured while investigating the Ning-Po, a ship linked to Osato Chemicals, and is taken aboard to Helga's cabin, where she was waiting on a couch with her legs crossed, dressed in a much more seductive way. An expert in torture via surgical implements, Bond is spared a violent integration when she inappropriately decides to seduce and kiss him, aroused by Bond, and enjoying the fact of having him for herself only. 007 claims that he is an industrial spy and facetiously offers Helga $150,000 to help him escape back to Tokyo. She first refuses, stating that Osato would kill her, but after a brief hesitation she cuts his bonds and the pair has sex. Shortly afterward they board a Meyers 200 aeroplane supposedly bound for Tokyo. However, in mid-flight, while she is applying her makeup listening Bond offering her a protection from her bosses, Brandt, who in reality never wanted to betray them, traps him with a smoke bomb and a wooden restraint. She promptly parachutes to safety; leaving the spy to perish in the resulting plane crash. Unfortunately for Helga and unbeknownst to her, Bond escapes the death trap and makes an emergency landing.

The following day, Brandt is seen in the operations room of SPECTRE's volcanic launch site, where she assists in the capture of a Soviet spacecraft. Ernst Stavro Blofeld summons Osato and Number 11 to his quarters for an urgent report and reprimands them for failing to recognize and kill 007. The pair are unnerved by the revelation, believing Bond to have been assassinated in Hong Kong. Osato attempts to shift the full blame to the nervous Brandt, who tersely suggests that he should have killed the spy himself, given his numerous opportunities. Blofeld reminds them that SPECTRE does not tolerate failure, bids them leave but gives Osato one last chance. Helga gives an imploring look to Blofeld before leaving, hoping for some leniency towards her as well, but the Number 1 has decided to make her pay her failure with her life. As she crosses a bridge suspended above a piranha pool, Blofeld drops it from below the secretary, and she tumbles with surprise to her horrific death in the swarming waters below, helpless and screaming out in pain as the piranhas shred her under Osato's terrified look.

Miss Brandt (her first name is never mentioned in the film) was created specifically for the EON Productions adaptation of Ian Fleming's 1964 novel, You Only Live Twice, by author and screenwriter Roald Dahl. While no similar character existed in Fleming's novel, Brandt was the name of Emilio Largo's mechanic in his 1961 novel, Thunderball. Many European models were tested for Helga Brandt including German actress Eva Renzi who passed on the film,[1] with German actress Karin Dor being cast. Dor performed the stunt of diving into a pool to depict Helga's demise herself, without the use of a double.[2] Peculiarly, for the German version of You Only Live Twice, Dor was dubbed by another actress.[3] According to Karin Dor, who is a natural brunette, the producers wanted a "blonde German girl [to play Helga Brandt] but they ended up with me". As a compromise, they dyed her hair red for the movie, turning Brandt into something of a Fiona Volpe clone.

During the filming, Karin Dor was nearly hit by a falling spotlight. 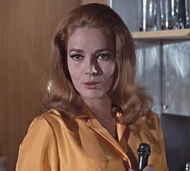 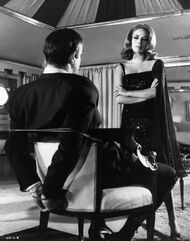 Miss Brandt being strictly ordered by her boss to kill Bond

Number 11 enjoys herself during her mission

Helga kissing Bond instead of killing him

Helga hesitates but then frees Bond, thinking she will kill him later, in order to have sex with him

Number 11 trapping Bond with her lipstick

Helga parachutes out to safety, convinced she has succeeded her mission to kill 007

Helga and her boss being called for report by Blofeld

"This organization does not tolerate failure." Number 11 pays the very high price of her failure 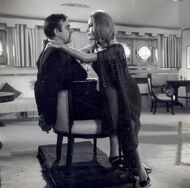 Helga Brandt flirting with Bond instead of killing him 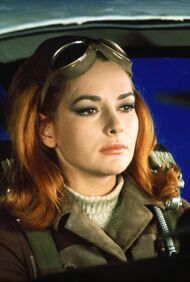 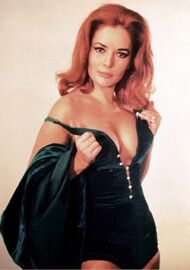 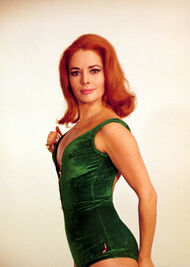