Honey: "What are you doing here? Looking for shells?"
Bond: "No. I'm just looking."
Honey: "Stay where you are."
Bond: "I promise you, I won't steal your shells."
Honey: "I promise you, you won't either."
―Honey meets Bond for the first time.[src]

Honey Ryder is a fictional shell-diver and love interest of James Bond. Based on the character Honeychile Rider from the 1958 Ian Fleming novel, Dr. No, the Bond girl appeared in the 1962 James Bond film of the same name, portrayed by Swiss-American actress, Ursula Andress, but voiced by the late German actress, Nikki van der Zyl, due to Andress' Swiss-German accent. Honey was subsequently re-imagined for the 2015 mobile game, James Bond: World of Espionage. The first main Bond girl in the EON Productions film series, she was also one of the most popular.

Having drawn a link between the murder of fellow British spy, John Strangways, and radioactive samples he had taken from an island named Crab Key in Jamaica (owned by the reclusive criminal operative, Dr. Julius No) James Bond convinces his ally Quarrel to take him there by boat. There Bond meets the beautiful Honey Ryder, dressed only in a white bikini, who is collecting shells and singing "Under the Mango Tree". She emerges from the sea and Bond finds her to be beautiful right away, scaring her by joining in singing. At first she is suspicious of Bond but soon decides to help him after Dr. No's guards destroy her boat. Honey shows Quarrel and Bond a way to evade the henchmen when caught. After they escape, she tells Bond how her father died when on Crab Key, after which she was raped by a local landlord. Honey relates how she got her revenge by putting a black widow spider in his mosquito net and causing his lingering death. This shows a very deadly side to her, though she maintains a look of innocence and naivety.

After nightfall they are attacked by the legendary "dragon" of Crab Key, which turns out to be an armoured tractor equipped with a flamethrower. In the resulting gun battle, Quarrel is incinerated whilst Bond and Honey are taken prisoner. They are decontaminated, quartered in Dr. No's lair, and given drugged coffee to render them unconscious. They dress and meet Dr. No in his office, where he invites them to lunch. After dinner, Ryder is taken away and Bond is beaten by the guards. Later, after killing Dr. No and sabotaging the island's reactor, Bond rescues Honey from being slowly drowned. As the complex explodes, the pair escape by boat until they run out of gas in the middle of the sea, and start kissing.

As in the novel, Honey is a very independent woman claiming to not need help from anyone. She is a  beachcomber making a living selling seashells in Miami. Resourceful and courageous, she states that she can defend herself against any hostile when she first meets Bond. Although she is at first wary of Bond, he is allowed to get closer when he comments that his intentions are honourable.

As "The Original Bond Girl"

In the film series, Honey is widely regarded as the first Bond girl, although she is not the first woman in the film to be with Bond (that distinction belongs to Sylvia Trench, while Miss Taro was Bond's first mission-related "conquest"). Her entrance in the film, emerging from the ocean in a white bikini with hunting knife belt around her waist, striding barefoot over the wet beach sand, carrying large seashells whilst taking off her diving mask as while the sun shines on her wet blonde hair while she is singing "Underneath the Mango Tree", is considered a classic James Bond moment and is one of the most popular scenes in cinematic history. This scene was also only the second time an actress had worn a bikini on screen after and God created Woman, but this movie is given the credit for single-handedly making the bikini as popular as it is today. As a homage, costume designer Linda Hemming made a similar costume of a La Perla bikini and patterned Ghost sarong as an outfit for Izabella Scorupco's character Natalya Simonova in the 17th James Bond film GoldenEye and Halle Berry performed a similar scene to Ursula's in an orange bikini in the 20th James Bond film, Die Another Day. Mariah Carey also references this scene in the music video for her song "Honey".

The character was later mentioned by name in On Her Majesty's Secret Service as a "beautiful movie star." Andress is the first of only two entertainers that have actually starred in a Bond film to be mentioned by Ian Fleming in his James Bond novels. The other is David Niven who co-starred as James Bond in the 1967 film adaptation of Casino Royale along with Andress.

The film changed quite a few points in the novel, one of which being Honey's outfit, or rather lack thereof. In the original novel, Honey emerges from the water naked, wearing only the belt. When she notices that Bond is watching her, she covers her face to hide her identity. Understandably Honey was given a bikini in the film, and isn't ashamed when she sees Bond. Due to the films taking place during the present day of the films and not the books, the bikini had been around long enough to include.

In the 1958 James Bond novel Dr. No by Ian Fleming, Crab Key is named after the thousands of large land crabs – what they call in Jamaica "black crabs" – which infest the island. The book features a scene where Dr. No plans to torture Honey to death by tying her naked to the ground in the path of the crabs' migration; mistakenly believing that the animals are carnivorous from the death of an earlier victim. A similar scene was initially replicated for the 1962 film with Honey being tortured by being tied to the ground along with crabs, but since the crabs were sent frozen from the Caribbean, they did not move much during filming, so the scene was altered to have Honey slowly drowning.[1]

Honey emerging from the sea

Honey singing and admiring her collection of shells

(After hearing Bond singing along) "Who is that?"

"Stay where you are!"

Bond and Honey being held prisoner by Dr. No 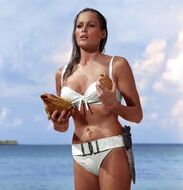 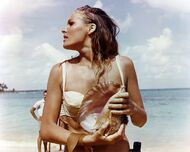 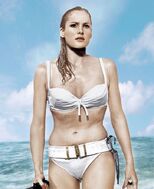 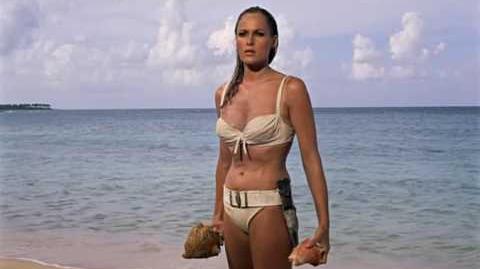