Deceased, shot by a poison dart and blasted into space

"At least I shall have the pleasure of putting you out of my misery. Desolated, Mr Bond."
― Hugo Drax's last words, before being shot and killed by James Bond.[src]

Hugo Drax (who has the honorary title of "Sir" in the novel) is a fictional character created by author Ian Fleming for the James Bond novel Moonraker. Fleming named him after his friend, Sir Reginald Drax. For the later film and its novelization, Drax was almost entirely changed by screenwriter Christopher Wood. In the film, Drax is portrayed by French actor Michael Lonsdale. In both versions of Moonraker, Drax is the main antagonist.

In the film adaptation, Hugo Drax is a American billionaire living in California in a château that was imported brick-by-brick from France. He owns Drax Industries, which constructs space shuttles. When Bond jokingly suggested if that would be done to the Eiffel Tower, it was remarked that Drax seriously attempted to do so, but the French government denied him an export permit. Drax portrays himself as an accomplished pianist, as evidenced by his recital of Chopin's "Raindrop" Prelude in D flat major (op. 28) on his grand piano (which he plays in the key of D). In actuality, Drax's piano is a souped-up version of an old-fashioned player piano, and the complex sonatas are to impress visitors.

"Look after Mr. Bond. See that some harm comes to him."
― Drax orders Chang to kill Bond.[src]

An example of the Drax character's ruthlessness as portrayed in the film is given by the manner in which he disposes of enemies. In one case, after discovering that his personal pilot Corinne Dufour had assisted Bond in discovering his plans, Drax fires her and proceeds to set his trained dogs on her. The Beaucerons chase her into a forest on the estate and kill her.

When a plane carrying a Moonraker space shuttle on loan to the UK by Hugo Drax crashes, James Bond is sent to investigate what happened to the shuttle. As the shuttle was crafted by Drax Industries, Bond travels to California, where the shuttles are manufactured. There, he is picked up by Corinne Dufour and flown to Drax' estate, which is from France. Bond is then welcomed by Cavendish and brought to the drawing room, where Drax is playing Chopin's "Raindrop" Prelude in D flat major (op. 28) on his grand piano. He is then interrupted by Cavendish, who introduces him to Bond. After his female companions, Lady Victoria Devon and Countess Labinsky have left, Drax welcomes Bond, believing that his government sent him to apologize for the loss of the space shuttle. Bond tells him that an apology will be made to the American government when the British Secret Service has found out why there was no trace of the Moonraker in the crash site. They are then interrupted by Drax's henchman Chang, who delivers tea. While drinking, Bond asks Drax about the Moonraker. Dufour then returns and Drax tells Bond that she will bring him to Dr. Holly Goodhead, who will show him around. After Bond and Dufour are gone, Drax tells Chang to make sure that "some harm" comes to Bond.

After having been shown around by Goodhead, Bonds returns to Drax's office at night and opens his safe. Inside he finds files containing blueprints. He takes pictures of the files and returns them to the safe. This is witnessed by Chang.

The next day, Drax is having a pheasant hunt on the countryside surrounding his estate. He invites Bond, but Bond declines as he is leaving. He stops by to bid Drax farewell and thank him for his hospitality. Drax convinces him to participate, as a pheasant could fly over. Having posted an armed henchman in the trees nearby, Drax arranges for an "accident" to kill Bond. When a pheasant flies, Drax points at it and Bond takes the rifle. He shoots, not hitting the pheasant, prompting Drax tells Bond that he missed. As soon as he says this, the assassin's dead body falls out of the tree, to which Bond responds "Did I?" A somewhat nonplussed Drax takes his rifle back when Bond gives it to him and watches Bond drive off.

He then turns to see Corinne Dufour arrive. He tells her that he knows that she and Bond were in his office last night and that she showed Bond the safe. Although Corinne denies it, Drax tells her that her employment is terminated and that she will leave immediately. Corinne then turns, but Drax orders Chang to release his doberman pincers, which follow Corinne into the forest and rip her apart.

After finding out that Drax is manufacturing a highly lethal toxin in his Museum Of Antique Glass in Venice, Bond reports this to his superiors. However, when an investigation is made, Bond and his superiors arrive to see the laboratory has been replaced with an elaborate dining room, forcing the British Secret Service to apologize for Bond's error. Leaving the building, Fredrick Gray tells Bond that he has never been so humiliated in his life. Bond then hands M a flask of the toxin which he took from the laboratory.

Expecting to have defeated the MI6, Drax calls an associate in order to employ a replacement for Chang, who was killed by Bond. This leads him to employ Jaws as his new henchman but Drax is not seen until much later in the film.

Bond is eventually captured by Drax' henchwomen while investigating the Brazilian jungle for the plant Drax uses to create his toxin. He is brought before Drax, who brings him into the control room of the base. He there tells him about his toxin. On a screen, Bond and Drax then witness the lift-off of four Moonraker shuttles, causing Bond to ask for Drax' motivation for stealing the shuttle he lends to the British government. Drax tells him that he needed it as one of his own was faulty.

Claiming that Bond has distracted him enough, Drax tells Jaws to place Bond somewhere where he can get warm after his swim. Bond is brought into the chamber underneath the last moonraker shuttle, where Dr. Goodhead already awaits him. Drax then enters the shuttle, leaving Bond and Goodhead to die in the fire when the rocket lifts off. By use of his watch, Bond and Goodhead manage to flee into the air vent and escape their fiery demise. To uncover Drax's plan, Bond and Goodhead enter the sixth Moonraker shuttle which takes them to Drax's space base.

Space base and death

Hugo Drax: "At least I shall have the pleasure of putting you out of my misery. Desolated, Mr. Bond?"
James Bond: "Heartbroken, Mr. Drax. Allow me. Take a giant step for mankind."
―Hugo Drax and James Bond[src]

On Drax's base, Bond and Goodhead mix with the rest of the pilots, listening while Drax holding a speech. Finally, explaining his plan, Drax explains that he, in a scheme similar to that of Karl Stromberg's plan, seeks to destroy the entire human race except for a small group of carefully selected humans, both male and female, which he views as physically perfected specimen to create a super race with. Using chemical weapons created by Drax's scientists, derived from his toxin, he intends to wipe out the remainder of humanity, while keeping all animals on Earth alive. The biological agents were to be dispersed around the earth from a series of 50 strategically placed globes, each containing enough toxin to kill 100 million people. After a period of time, when the chemical agents have become harmless, Drax plans for his master race to return to Earth to repopulate the planet.

After Bond and Goodhead deactivate the bases' radar jammer, the space station appears on the radar of the Americans and a shuttle full of soldiers is sent to investigate. When told about this, Drax orders his men to use the bases' laser to destroy the approaching shuttle. He is interrupted when Bond and Goodhead, who have been captured by Jaws, are brought before him. He then introduces to Bond the airlock chamber, intending to eject him and Goodhead into space. Intending for Jaws to hear, Bond inquires whether anyone not fulfilling his ideals of perfection will be exterminated, which Drax confirms. Realizing that neither he nor his girlfriend meet Drax' ideals, Jaws switches sides and attacks Drax' men. They are however overwhelmed by Drax' men. To evade the destruction of the approaching shuttle and their own death, Bond quickly moves and pushes the bases emergency stop button, causing the entire facility to violently shake. As the base is no longer rotating, it also has no gravity. Bond, Goodhead and Jaws use this advantage to escape from the main room.

Meanwhile, Drax's men and the approaching US soldiers meet in space and battle each other, with heavy casualties on both sides. One technician also manages to get the station rotating again, however the soldiers have already managed to dock their shuttle and have boarded the station, creating a massive battle in the control room. Bond witnesses Drax running off and follows him, following him near the airlock chamber. There, Drax grabs a gun from a fallen soldier and points it at Bond, claiming that he will at least have the chance to put Bond out of Drax' misery. However, Bond acts first, shooting Drax with a cyanide dart out of his wrist gun. Mortally wounded, Drax stumbles back and Bond opens the airlock chamber to blast the dying Drax into space.

In his novelization of the film, screenwriter Christopher Wood describes Drax as red-haired and with a face scarred and botched by poor plastic surgery (from a time "before he could afford the best in the world"), much as originally envisioned by Fleming. Although Drax's nationality is not specified, Bond idly wonders to himself which side he fought on during World War II.

Fleming used aspects of his private life to create the character Drax: Hugo Drax was named after his acquaintance Admiral Sir Reginald Aylmer Ranfurly Plunkett-Ernle-Erle-Drax. Other elements of the plot came from Fleming's knowledge of wartime operations carried out by T-Force, a secret British Army unit formed to continue the work of 30 Assault Unit, itself created by Fleming.

The character of Hugo Drax appeared in the game 007 Legends with a likeness of Michael Lonsdale.

"Mr. Bond, you persist in defying my efforts to provide an amusing death for you."
― A frustrated Drax refers to the many attempts made on Bond's life.[src]

"James Bond. You appear with the tedious inevitability of an unloved season."
― [src] 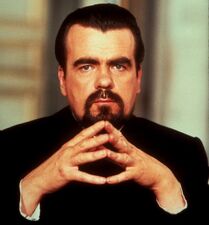 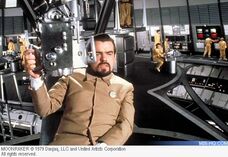 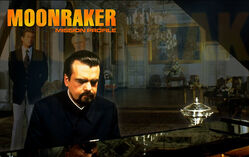 "Take a giant step for mankind."
Add a photo to this gallery

Retrieved from "https://jamesbond.fandom.com/wiki/Hugo_Drax_(Michael_Lonsdale)?oldid=99224"
Community content is available under CC-BY-SA unless otherwise noted.