"Apart from the fact that he wears the same clothes that I wear, he and I really have little in common. I do rather envy him his blondes and his efficiency, but I can't say I much like the chap."
― Ian Fleming

Ian Lancaster Fleming (28 May 1908 – 12 August 1964) was an author, journalist and Commander in the Royal Navy, most famous for creating the James Bond series.

Ian Lancaster Fleming (28 May 1908 – 12 August 1964) was an English author, journalist and naval intelligence officer, best known for his James Bond series. Fleming came from a wealthy family connected to the merchant bank Robert Fleming & Co., and his father was the Member of Parliament for Henley from 1910 until his death on the Western Front  in 1917. Educated at Eton, Sandhurst and the universities of Munich and Geneva, Fleming moved through a number of jobs before he started writing.

While working for Britain's Naval Intelligence Division during the Second World War, Fleming was involved in planning Operation Goldeneye and in the planning and oversight of two intelligence units, 30 Assault Unit and T-force. His wartime service and his career as a journalist provided much of the background, detail and depth of the James Bond novels.

Fleming wrote his first Bond novel, Casino Royale, in 1952. It was a success, with three print runs being commissioned to cope with the demand. Eleven Bond novels and two short-story collections followed between 1953 and 1966. The novels revolved around James Bond, an officer in the Secret Intelligence Service, commonly known as MI6. Bond was also known by his code number, 007, and was a commander in the Royal Naval Reserve. The Bond stories rank among the best selling series of fictional books of all time, having sold over 100 million copies worldwide. Fleming also wrote the children's story Chitty Chitty Bang Bang and two works of non-fiction. In 2008, The Times ranked Fleming fourteenth on its list of "The 50 greatest British writers since 1945".

He was married to Ann Charteris, who was divorced from the second Viscount Rothermere as a result of her affair with Fleming. Fleming and Charteris had a son, Caspar. Fleming was a heavy smoker and drinker who suffered from heart disease; he died in 1964, aged 56, from a heart attack. His novel The Man with the Golden Gun and short story collection Octopussy and The Living Daylights were released posthumously and he only saw two of his Bond novels turned into films: Dr. No and From Russia with Love. Other authors have since produced Bond novels.

Fleming was born in Mayfair, London W1 of parents Valentine and Evelyn st. Criox Rose. He had an elder brother Richard and a half sister Amaryllis. Fleming Married Anne Geraldin Mary Charteris in 1952. They had a son Caspar Robert Fleming.

Fleming's education began at Sunningdale School, Berkshire, Eton Colledge and the Royal Military Academy Sandhurst, (RMAS) or informally Sandhurst, which he was not fond of. He left Sandhurst early and improved his languages at Kitzbühel, Austria, studying German mainly. In preparation for his Foreign office exams he also went to Munich University, and the University of Geneva where he Improved his French.

After failing to join the Foreign Office Fleming managed to find work as a reporter and sub editor for Reuters news service. He spent some time in Moscow in 1933. Later he became a stock broker in Bishopsgate, London for Rowe Pitman including time in 1933 in Moscow, and then as a stockbroker with Rowe and Pitman, in Bishopsgate.

Fleming was already a reserve in the Black Watch. He was recruited in 1939 as personal assistant to Director of Navy Intelligence. His career moved through, Royal Naval Volunteer Reserve lieutenant, to Lieutenant Commander and later became Commander (codename was 17F0) One of Fleming produced reports of geographical reports on countries engaged in military operations with Kenneth Mason, a Professor of Geography. He later developed a plan to maintain communication with Gibraltar. The plan was code named GoldenEye.

Fleming was given responsibility of planning for of 30 Assault Unit in 1944 which are specialist commandos, aka 30 Commando). They used the gathered intelligence to direct the commandos to targets predetermined in early campaigns. This included raids on enemy headquarters for intelligence. 30 Commando were seconded to other forces as opposed to independent activities. Later, due to it reliable information and efficiency it was given direct tasks under Fleming's control. He later had to make a case for the misuse of the Commandos for being the main force as opposed to intelligence gathering which was becoming less of a priority and would cause a loss of reporting which would have made other units less effective.

In 1944 Fleming became a member of Boodle's gentleman's club in St. James's Street, until his death in 1964. 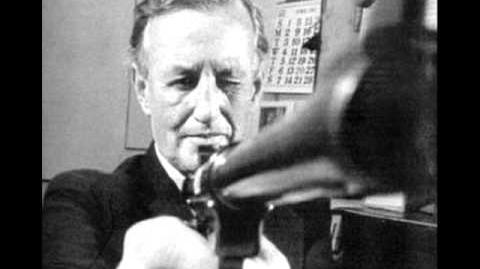 Desert Island Discs- Ian Fleming (1963)
Fascinating interview with Ian Fleming in 1963 in which he talks about how he first imagined James Bond to distract him from the 'agony' of getting married. He also discusses writing The Spy Who Loved Me, and visiting the film-set of From Russia with Love in Istanbul. 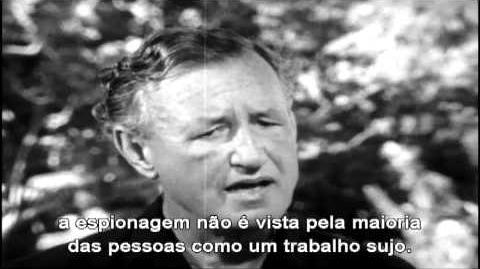 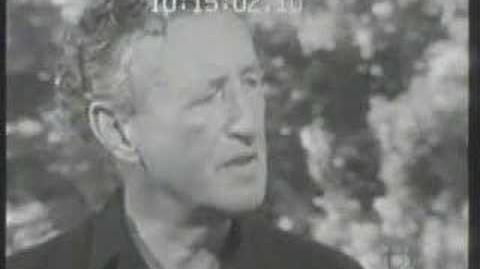 How Ian Fleming created James Bond-0
Ian Fleming, creator of James Bond. Here is him talking about his famous character...
Community content is available under CC-BY-SA unless otherwise noted.
Advertisement