Irma Bunt is a fictional subordinate of criminal mastermind, Ernst Stavro Blofeld. Based on the literary character who first appeared in the 1963 Ian Fleming novel On Her Majesty's Secret Service, she was the secondary antagonist in the 1969 film of the same name, portrayed by the late German actress Ilse Steppat. The role was Steppat's only English speaking part.

A stocky, red haired middle aged woman, Irma Bunt resides and works at the mountain-top clinic of Piz Gloria with Ernst Stavro Blofeld. She is first introduced at a train station taking James Bond up to the clinic by sleigh and helicopter while he is disguised as Sir Hilary Bray. She ostensibly looks after the girls who are suffering allergies – and secretly being brainwashed into "angels of death". A red-haired matron in the mold of Rosa Klebb, Bunt is determined to keep any rules from being broken by "Sir Hillary Bray", who is unaware of the conditions she places on the guests.

She shows "Bray" to a doctor and orders Grunther to inspect his luggage, as well as invites him to dinner in the alpine room with the twelve other girls. However, she enforces rather specific rules, such as not revealing the patient's last names, not discussing clinic staff affairs and not disclosing their room numbers.

Later on, as Bond attempts to sneak out of his bedroom to visit Ruby Bartlett, he is almost detected by Bunt, who walks past his door conversing in German with an unknown Piz Gloria employee.

When Bond escapes from Piz Gloria after his cover as Sir Hilary Bray is blown, Bunt helps her henchmen Braun and Felsen pursue him in the village at the bottom of the mountains with a Mercedes-Benz W111. She fails in this and is almost killed when she is caught in an explosion at a stock car rally which Tracy had led her into in an attempt to shake her off. Bunt and the other three occupants of the car managed to escape it just before the explosion, but Bunt ended up getting slightly caught in the blast.

She is not seen again until right at the end of the film after 007's wedding. Bunt shows up, alive and well, in a car driven by Blofeld. As they pass the newlyweds, Bunt leans out of the window and fires at Bond with an M16. Bond is unharmed, but Tracy is killed by a headshot. It should be noted that although Blofeld was merely the driver in this drive by shooting, it was Irma Bunt who had the machine gun and opened fire. Bond however held Blofeld entirely responsible.

Unusually for a Bond film villain, Bunt escaped punishment and retribution from 007; she did not appear in the following film, Diamonds Are Forever, or any subsequent movie, since Ilse Steppat passed away shortly after On Her Majesty's Secret Service was released, and ultimately Diamonds Are Forever mostly eschewed the events of On Her Majesty's Secret Service and never mentioned Tracy's murder. Therefore, her ultimate fate remains unknown. 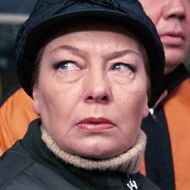