"By the powers invested in me by this parish, I hereby do commandeer this vehicle and all those persons within. And that means you, smart ass."
― J.W. Pepper.[src]

Sheriff John W. Pepper is a fictional parish sheriff in Louisiana, United States. Portrayed by the late American actor Clifton James, he appears in EON Productions' James Bond films Live and Let Die (1973) and The Man with the Golden Gun (1974).

J.W. Pepper is first introduced during the boat chase sequence of Live and Let Die. Pursuing Bond at nearly 90 miles an hour, Mr. Big's henchman Adam unwittingly draws the attention of the Sheriff who gives chase and arrests him at gunpoint. Seconds later, Bond's Glastron Speedboat jumps the embankment beside the pair, followed by his pursuer who crashes into Pepper's squad car. In the ensuing chaos Adam escapes and continues the chase. Subsequently, two of Pepper's colleagues arrive and share a joke at the Sheriff's expense. He then commandeers their police vehicle and proceeds to Miller's bridge, where the police have set up a "road-block" down stream of Bond. The blockade completely fails and Pepper arrives to find the officers being fished out of the river.

Lacking the resources to keep up with Bond, J.W. attempts to enlist the help of his brother-in-law, Billy-Bob - who apparently owns the fastest boat on the river. A boat which quickly falls into the hands of Adam, who speeds off to join the chase by water. Waiting for Billy-Bob further along the river, J.W. notices his boat rounding a bend in the river. Too busy bragging about his brother-in-law, Pepper is the only one of the group who fails to notice that driver (who they assume is Pepper's brother-in-law) is Adam. En route to intercept Bond, Pepper and several of his squad cars are involved in a series of crashes, caused by 007 once again leaping the bank ahead of them. After the ensuing pile-up, J.W. scrambles out of the wreckage and rides the rest of the way in one of the few surviving - but completely battered up - vehicles. Confronting Bond and Felix at the marina, the irate Sheriff accuses Bond of being a "doomsday machine" and attempts to bring him into custody. At Leiter's request, the police captain present reveals Bond's identity and authority, much to J.W.'s frustration.

In The Man with the Golden Gun, the Sheriff is presumably on holiday in Thailand with his wife, Maybelle. After a ferry ride and Maybelle looking for some souvenirs, J.W. notices an elephant sticking its trunk in his pocket before he insults it, and it pushes him into the river in retaliation. Later on, when Bond needed a vehicle to pursue Francisco Scaramanga, he come across an AMC dealership, and heads for an AMC Hornet. Inside, J.W., not noticing him at all, asks for a demonstration, which Bond sarcastically complies and drives it out through the plate glass window. During the ride, J.W. and Bond suddenly recognise each other before the latter resumes his chase for Scaramanga and Nick Nack, who have kidnapped Mary Goodnight. Dur the chase, they end up taking the wrong path with Scaramanga on the other side of a river, which made J.W. reprimand Bond for the mistake before the latter notices a destroyed bridge. Somehow knowing what he plans to do, J.W. finds it impossible, but Bond goes off the broken bridge, like a ramp and resulting in a corkscrew jump, which made J.W. fall into the back seat, remarking he never done the jump before, which Bond replied he didn't either. When they reach a warehouse Scaramanga went into, they try to get in, only for the Thai police to show up and J.W. tries to tell them he is a police officer, but they handcuff him to one of their own. Bond managed to escape when he and some officers hear Scaramanga escaping in a car, sprouting wings. It is unknown what happened to J.W. afterwards. 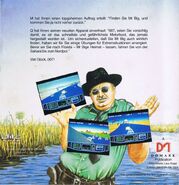