Commander James Bond is a Senior Operational Officer of the 'Double-O' ('00') Branch, an ultra-covert Black Ops unit within the British Secret Intelligence Service (MI6). As an agent of MI6, Bond holds code number "007". The 'double-O' prefix indicates his discretionary licence to kill in the performance of his duties.

Portrayed by actor Andrew Bicknell, the character appeared in the Electronic Arts' 2001 James Bond video-game Agent Under Fire. Bicknell's Bond was due to appear in its 2002 sequel, but due to Pierce Brosnan renewing his contract for the 2002 film Die Another Day, the actor was dropped from the project.

While investigating the Identicon Corporation in Hong Kong, a botanical research firm and a possible front for a weapons-smuggling ring, CIA agent Zoe Nightshade is discovered and captured. James Bond infiltrates the facility in an attempt to rescue her and retrieve a suspicious courier case. After freeing Nightshade from a submarine set to launch, the pair flee the facility with the courier case. Nigel Bloch, the head of Identicon, has his operatives chase the agents through the streets of Hong Kong. The two steal a second case of vials from a nearby Identicon factory. They then rendezvous with Q Branch liaison R, who provides Bond with a gadget-laden BMW Z8. As they inspect the vehicle, a limousine pulls up alongside and an assassin inside launches an RPG, killing Zoe, and steals the case. The vials are transferred to an armored van and Bond gives chase, eventually stopping it.

The vials contain nine blood samples, eight of which contained blood of world leaders. One contains the blood of British diplomat Reginald Griffin, serving in Romania, who is obsessed with protecting a room, outside of his jurisdiction, in the embassy. Bond covertly investigates the embassy, finding Griffin dead, before a man of identical appearance attacks him. After overcoming the doppelganger, Bond finds a message from Bloch on Griffin's computer that mentions Malprave Industries, based in Switzerland. Bond takes the information from the computer and escapes.

At Malprave Industries, Bond, posing as a journalist, sees that the CEO is a woman he met at the embassy, Adrian Malprave. After collecting evidence, he makes his escape from the facility. Analysis of the computer message from Romania mentions "Defective Merchandise", believed to be a codename for Dr. Natalya Damescu, formerly in the employ of Malprave, now under protection at the British embassy in Bucharest. She also has inside information to offer. Carla the Jackal, the infamous assassin who earlier killed Zoe, leads a raid on the embassy. Bond fights the terrorists before running into Damescu. After a confrontation with the Jackal, Bond picks up a data chip on something known as Poseidon, and delivers it to R for analysis. The chip leads Bond to an oil rig in the South China Sea. After running into Bloch, Bond follows him into Poseidon, an underwater base devoted to human cloning.

After destroying the lab, he climbs onto a submarine bound for a Royal Navy aircraft carrier in Mediterranean. On-board, Bond finds Zoe, who reveals that the woman he "saved" from the Identicon facility in Hong Kong was a clone meant to infiltrate the CIA, and that the Jackal had intended to kill Bond. Arriving at the carrier, the pair investigate the ship. It is discovered that eight world leaders have been cloned, and are to be replaced by the clones. 007 destroys the craft carrying the clones, and the pair make their escape. They travel to Malprave's base in the Swiss Alps, where Bond rescues the eight world leaders. Before he can escape from the base, however, he encounters Malprave, who has set the base to self-destruct. She reveals Bloch is still alive, and that Bond had killed his clone. After an encounter with him, Bond follows him into the main office and kills him. Just as he manages to leap free of the base before it explodes, Malprave appears and tries to jump clear too, but she is consumed and dies in the blast.

It's known that 2002's Nightfire was a follow up to Agent Under Fire which had Andrew Bicknell's physical appearance and motion capture performance used for the James Bond character. And by that time, Pierce Brosnan did not renew his contract with EON Productions for a fourth film until late 2001. Nightfire was in development already when its prequel was in the release stages and Bicknell was considered to be reprising his role as Bond. However, he was dropped from the project immediately when Pierce Brosnan returned to the role once more in Die Another Day, and the Electronic Arts company decided to take his likeness for the Bond role, and eventually, he took over the part from Bicknell. The latter's likeness, perhaps mistakenly, somewhat appears in a few cutscenes from the GameBoy Advance version of the game, while in other scenes, Brosnan's Bond pops up. Fans have cited the element as development error.

Andrew Bicknell's Bond as he appears in the pre-release "Nightfire" version.

Bicknell's Bond, as he appears on an in-game loading screen. 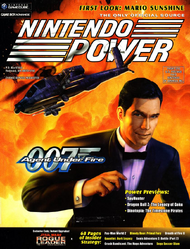 James Bond appears on the cover of Nintendo Power Magazine (Volume 155, April 2002).
Add a photo to this gallery

Retrieved from "https://jamesbond.fandom.com/wiki/James_Bond_(Andrew_Bicknell)?oldid=99959"
Community content is available under CC-BY-SA unless otherwise noted.