James "Jimmy" Bond appeared in the Climax episode "Casino Royale", a television adaptation of Ian Fleming's first novel which aired in 1954. Though this is regarded as the first onscreen appearance of the character James Bond, the character is an American agent with "Combined Intelligence". He was portrayed by American actor Barry Nelson.

As soon as he arrives at Casino Royale, Bond narrowly survives an assassination attempt and pairs up with his contact; British Intelligence officer, Clarence Leiter, who remembers "Card Sense Jimmy Bond" from when he played Maharajah of Deauville. While Bond explains the rules of baccarat, Leiter explains Bond's mission: to defeat SMERSH operative Le Chiffre at baccarat and force his Soviet spymasters to "retire" him.

Jimmy then encounters a former lover and French agent of the Deuxième Bureau, Valerie Mathis, who is Le Chiffre's current girlfriend. Her allegiance is under question throughout the episode, but concludes with her siding with Bond.

Bond beats Le Chiffre at baccarat but, when he returns to his hotel room, is confronted by Le Chiffre and his bodyguards. Le Chiffre tortures Bond in order to find out where Bond has hidden the cheque for his winnings, but Bond does not reveal where it is. After a fight between Bond and Le Chiffre's guards, Bond shoots and wounds Le Chiffre, saving Valerie in the process.

Exhausted, Bond sits in a chair opposite Le Chiffre to talk. Mathis gets in between them and Le Chiffre grabs her from behind, threatening her with a concealed razor blade. As Le Chiffre moves towards the door with Mathis as a shield, she struggles, breaking free slightly and Bond is able to shoot Le Chiffre. 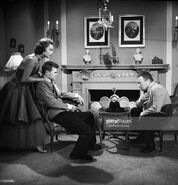 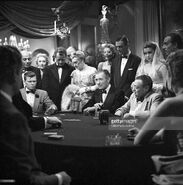 Retrieved from "https://jamesbond.fandom.com/wiki/James_Bond_(Barry_Nelson)?oldid=87099"
Community content is available under CC-BY-SA unless otherwise noted.