"For years he's risked his life to save the world... now its your turn!"
― Attraction tag line, Fox Studios, Australia.

James Bond 007: A License To Thrill (also named 007: Licence to Thrill at the London Trocadero) was a simulator ride theme park attraction that appeared in numerous amusement parks worldwide. The attraction was produced by Landmark Entertainment, best known for producing attractions at Universal Studios including "Jurassic Park: The Ride," and "Terminator 2 3D."[4] Then-current M, Judi Dench, and Q, Desmond Llewelyn, both reprised their parts for the project. Its script was penned by GoldenEye screenwriter Bruce Feirstein, who also collaborated on the mechanical aspects of the ride.[2] The experience centers around the adventures of James Bond (first-person perspective) as he tries to foil a kidnapping attempt by terrorist Gunther Thorne. Sequences from the four-minute stunt film[1] include a motorcycle chase, a shoot-out with the villains, leaping onto the trailing ladder of a helicopter from a moving train, dodging bullets and explosions, finally landing on a jet ski and saving the kidnapped girl.

A License To Thrill opened on May 9, 1998, with a joint premiere at Paramount's five North American amusement parks - Paramount's Great America, Paramount's King Dominion, Paramount's Carowinds, King's Island, and Canada's Wonderland in Toronto, Canada.[3] On August 17, 1999, the attraction was opened in the London Trocadero.[3][5] The final location of the attraction was Fox Studios Australia in Sydney, which opened December 1, 1999.[3]

During the pre-show, the audience stands and are briefed by the director of the British Secret Service, M via a 'live' video feed from MI6's headquarters in London. They are informed that they are standing in one of MI6's most closely-guarded secrets - a high-tech training facility that travels the world disguised as an ordinary theme park ride. She notes that the audience members have applied for a position in the 00 Section and provides them with a test to accompany 007 on his latest mission via a video feed from Bond's Q Branch-designed sunglasses. 007 (and the recruits) are tasked with rescuing Dr. Callie Reeves, a seismologist who has been seized by an international "techno-terrorist" named Gunther Thorne. Dr. Reeves has developed revolutionary new technology designed to release tectonic plate pressure, controlling future earthquakes. Thorne, however, has other plans for her research - intending to harness it to trigger earthquakes, rather than avoid them. The audience are then briefed on the technology behind Bond's glasses by Q, who is also testing a number of other gadgets including a machine-pistol disguised as a staple gun and a gas-chamber telephone booth. M concludes by telling the candidates that they will know if they have been selected for the 00 Section if they are ever contacted with the code-words 'Shaken not Stirred'. Before proceeding into the cinema, the audience members pass a "Q Workshop" with a Lotus Esprit and the Bede BD-5J micro-jet from the 1983 film Octopussy.

Upon entering the cinema room, participants are strapped into a simulator seats. The main show film begins with the traditional gun barrel sequence with a silhouette of James Bond. The gun barrel wipes across the screen to reveal the exterior of the Geo Thermal Institute (GTI), where Dr. Reeves delivers an enthusiastic announcement speech, flanked by two very athletic body guards. A helicopter whips through the air and hovers above the grand stand. The audience scatters and the body guards sweep Dr. Reeves off the grand stand. The helicopter fires a missile that destroys a Guard Shack in a terrific explosion. Through a billow of smoke emerge a trio of high-powered motorcycles led by Gunther Thorne. Gunfire explodes from their machine guns. One of the bikers gets SHOT and crashes. Thorne races his motorcycle up on the Grand Stand to capture Dr. Reeves. James Bond, on a BMW motor bike, flies through the air and lands in front of one of Thorne's henchmen and knocks him out with a blow to the face. 007 shoots another and then activates the graphic overlay system of his shades. The high-tech viewfinder zooms in on Thorne as he ties Dr. Reeves to the back of his bike. She struggles as he races into the Thermal Institute.

Bond chases Thorne into the Institute interior. As he breaks through the smoke, one of Thorne's henchman swings a large metal pipe. Bond ducks and steers past him. A thug on a forklift tries to cut Bond off, bullets from his machine gun whiz overhead. Bond races past, dodging some falling barrels. As Bond closes in Thorne tosses a hand grenade, which explodes and forces Bond toward a closed emergency exit. Another henchman unloads a burst of gunfire. 007 picks up speed and launches rockets from his BMW bike. The exit explodes in a ball of flame, sending the henchman flying over Bond's head. Bond emerges on a road at the exterior perimeter of the institute and accelerates following the road. Up ahead, the road dead-ends into a steep dirt embankment. A barrier blocks Bond's way. He accelerates toward the embankment, hitting it at full speed and lands on train tracks. Up ahead Thorne's motorcycle (with Dr. Reeves tied on the back) drives up a ramp and into the boxcar of a moving train.

Bond hits the throttle, gaining on the train, and as he nears the boxcar the loading ramp is pulled inside. "Q" appears onto the screen via Bond's glasses and warns him about taking care of his equipment as Bond steers off the tracks to avoid Thorne's gunfire and heads into the thick bush of the forest. He makes it through and guns the throttle, trying desperately to catch up to the train. Bond hits a mound of dirt at tremendous speed and launches the bike into the air and onto a flat car of the train. Bond accelerates and drives up a stacked pile of cut lumber onto the top of the train; jumping off the motorcycle and landing on top of a boxcar. The bike skids, sparks flying, along the top of the boxcar knocking a gunman off the train and exploding; sending debris flying toward the audience. As Dr. Reeves and Thorne struggle, Bond is confronted by and brawls with a second man - a huge martial artist. Outmatched, the assailant whips out a large knife and is about to deliver his death blow when his head collides with a sign announcing a low-hanging tunnel; falling to his doom. The audience and Bond are plunged into darkness as they enter the tunnel. Back out of the tunnel, Bond continues along the top of the train. Up ahead, Thorne is forcing Dr. Reeves up a rope ladder that is suspended beneath a helicopter taking off from a flat car. Bond sprints toward the chopper as it rises into the air; leaping just in time to catch the bottom rung of the rope ladder that dangles beneath the helicopter.

007 swings wildly back and forth, narrowly missing several trees, as the pilot does his best to knock him from the ladder. Bond looks up in time to see Thorne standing in the chopper's doorway above him. Thorne tosses a grenade into the helicopter, and bails out alongside the pilot and Callie. The chopper explodes, fragments narrowly missing Bond as he free-falls towards the ground. As he falls, the freefall causes interference with Bond's head link transmission. He gains on the pilot, struggling with the him in hand-to-hand combat. Bond prevails knocking the pilot unconscious and pulling the ripcord. He slows just 50 feet from the water; noticing Thorne with Dr. Reeves taking off in a Zodiac below him, followed by two jet skiers. Bond draws his pistol and blows up one jet ski; the other skier is shot, falling into the water. Bond lands on the remaining jet ski, shrugs off the parachute and continues his relentless pursuit of Thorne. From his Zodiac Thorne fires at 007 with a high-tech handheld rocket launcher. Bond swerves over and around explosions until ramming the Zodiac with his jet ski. Thorne tries to shoot with the rocket launcher but is unsteady. Callie sees her moment and leaps from the boat into the safety of the water.

Callie confirms to Bond that she is okay and he reverts his attention to Thorne, now some distance away. Bond's hands lift into frame as he presses a button on his watch. As Thorne desperately tries to reload, 007 takes aim using a target imaging system which appears on his Video Head link. The perspective switches to a missile which Bond has fired, flying over the lake straight for the barrel of Thorne's rocket launcher. A moment of recognition flashes across Thorne's face as he pulls the trigger. The missile-camera files into the rocket launcher's barrel and violently explodes sending debris from Thorne's Zodiac falling into the lake like metallic hail. The screen cuts to black followed by a splash as Bond leaps into the water. The screen flickers static. The audience see "TRANSMISSION ERROR" flash on the screen as the water has shorted out the glasses. As 007 flirtatiously asks Reeves "can you teach me how to make the earth move?" Q appears on Bond's damaged Video Head Link and chides "Oh, grow up, 007". The transmission completely shuts down, ending the ride as the music swells to a finale.[6]

Promotional material for the ride in Fox Studios, Australia. Features scenes from the ride.

Concept artwork for the 007 attraction's exterior, also used as a promotional backdrop in interviews.

Exterior and waiting line of a Paramount version of the attraction in North America.

A Licence to Thrill's version of the MI6 logo.

Q (Desmond Llewellyn) demonstrates the Q glasses, with which 007 is equipped.

Q gives some parting explanations to the 'recruits'.

Exterior of the Geo Thermal Institute building with approaching helicopter. 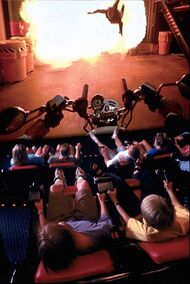 Licence to Thrill's James Bond performing a stunt on the BMW motorbike.

Gunther Thorne, as portrayed by stuntman Sonny Surowiec.
Add a photo to this gallery

Retrieved from "https://jamesbond.fandom.com/wiki/James_Bond_007:_A_License_To_Thrill?oldid=93911"
Community content is available under CC-BY-SA unless otherwise noted.