James Bond Jr. is the supposed nephew of Ian Fleming's masterspy James Bond. The name "James Bond Junior" was first used in 1967 for an unsuccessful spinoff novel entitled 003½: The Adventures of James Bond Junior written under the pseudonym R.D. Mascott. The idea of Bond having a nephew was used again in 1991 as an American animated television series, spawning a six-volume novelization series by John Peel (writing as John Vincent), a 12-issue comic book series by Marvel Comics published in 1992, and video games for the Nintendo Entertainment System and Super NES.[1][2][3] The character was voiced by Corey Burton.

003½: The Adventures of James Bond Junior

In 1967, Arthur Calder-Marshall, writing as R.D. Mascott, wrote 003½: The Adventures of James Bond Junior which chronicled the exploits of Bond's supposed nephew. Only one volume of this spinoff was published and surviving copies are considered collectables.

The animated series debuted on September 16, 1991 and a total of 65 half-hour episodes were produced. James Bond Jr. was voiced by Corey Burton.

While attending prep school at "Warfield Academy", James Bond Jr. with the help of his friends I.Q. (supposedly the grandson of Q) and Gordo Leiter (supposedly the son of Felix Leiter), fights against the evil terrorist organization SCUM (Saboteurs and Criminals United in Mayhem). Expanding on his uncle's famous line, James Bond Jr.'s catch-phrase was "Bond, James Bond. Junior."

Being an animated series, it regularly surpasses even the Bond movies in the matter of implausible gadgets and mad scientists, and, of course, the violence of the adult Bond series is nowhere in evidence. Despite this, the show was fully sanctioned by the rights holders to the James Bond property.

Fans of James Bond generally do not consider James Bond Jr. to be part of official Bond canon, especially as it conflicts with the fact that Bond was an only child and that the series featured characters such as Dr. Julius No who had been previously dealt with in the films and/or novels. Jaws, a recurring villain from the Roger Moore film era, also made occasional appearances; usually partnered with Nick Nack making the two henchmen a comical duo as they tend to bicker a lot, sometimes Oddjob is thrown into the mix for a henchmen interpretation of "The Three Stooges". Auric Goldfinger also appears revealing he has a snotty, teenage daughter named "Goldie." Many episode titles parodied the titles of Bond films, i.e. "A View to a Thrill" and "Live and Let’s Dance".


The various inhabitants of Warfield Academy, comprising James Bond Jr., his friends, Trevor Noseworthy and the two featured members of teaching staff, act as the series regulars, and all appear in almost every episode of the series. Sometimes only two or three of James's friends will accompany him on an adventure, leaving the others behind at Warfield to create a B-plot which normally revolves around Trevor's misguided attempts to get James into trouble. 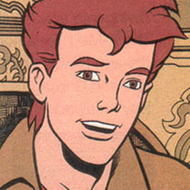 James Bond Jr. as he appears in the later Marvel comics. 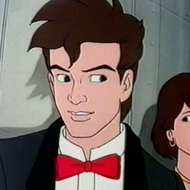 Retrieved from "https://jamesbond.fandom.com/wiki/James_Bond_Jr._(character)?oldid=97118"
Community content is available under CC-BY-SA unless otherwise noted.