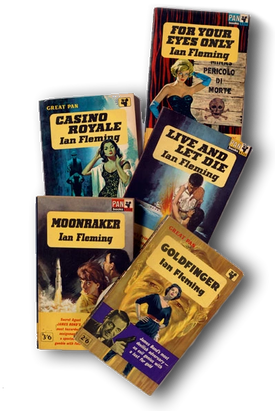 James Bond originated in the novels and short stories of Ian Fleming, and between 1953 and his death in 1964, he had written no less than fourteen books. Since then no less than six other writers have contributed to the series which Fleming started, bringing the total up to forty books, licenced by the Fleming estate. As with the films, and other media, some of these stick far closer to Fleming's original vision than others.

There is now a wide world of Bond media including films, comic strips, comic books, and video games. The various Post-Fleming continuation authors (1968-present) created their own separate literary continuities, whose only connection to one another is often Fleming's original novels.

After serving in the British Naval Intelligence Division during World War II, Fleming was inspired to write a novel about an international spy. Fleming bragged to his friends about how good he believed the book would be.

Fleming spent much of his time in Jamaica, and was a keen birdwatcher. He derived the name of his character from an American bird expert whose book on Caribbean birds he had enjoyed, and considered it to be bland yet masculine sounding.

Fleming gave the James Bond character some of his personal interests, including international travel, golf and gambling. He began writing his first Bond novel in 1952 in Jamaica over two months to take his mind off his upcoming wedding and pregnant fiancé. Casino Royale was published in 1953 to moderate reviews but great sales in the UK. It catered to a lot of wish fulfilment there, not just because of its beautiful women and exciting storyline, but also because Britain was still under rationing in the early fifties. The war itself had ended over five years earlier, but Britain was still littered with bomb sites and debt - Fleming's novel allowed ordinary people to enter a world of luxury, where characters drove fast cars, travelled the world, ate caviar and drank champagne.

Fleming, whose full time job was a foreign manager for a UK newspaper, used his annual three-month holiday to write each Bond book. This resulted in 1954's Live and Let Die, 1955's Moonraker, 1956's Diamonds Are Forever, 1957's From Russia with Love, 1958's Dr. No, 1959's Goldfinger, 1960's For Your Eyes Only -- a collection of short Bond stories -- 1961's Thunderball, 1962's The Spy Who Loved Me, 1963's On Her Magesty's Secret Service, and 1964's You Only Live Twice. Fleming was a heavy drinker and smoker and suffered heart disease. He suffered his first heart attack in 1961 and a fatal heart attack in August 1964. His final two books, 1965's The Man with the Golden Gun and 1966's collection of short stories Octopussy and The Living Daylights were published posthumously.

However, Fleming did live to see some of his work onscreen. He was apparently very impressed with Sean Connery in the role, and the films, and their influence affected the latter novels. Only Fleming's works were directly adapted for the screen, although other novelists have influenced later films. From the beginning, major changes were made to his work - the first TV adaptation of Casino Royale, Fleming's first novel, made Bond an American, and its first cinematic adaptation in 1967 departed from the novel even more, venturing into sixties psychedelia, slapstick and parodies of German Expressionism. Eon productions proclaim themselves as the official Bond film series, but while Dr. No, From Russia with Love and Goldfinger stayed reasonably faithful to the source material, Eon veered away from it after Fleming's death, with the likes of Diamonds are Forever and Moonraker owing very little to the original novels. As fashions and attitudes have changed, Bond films have also moved far away from Fleming's original conceptions.

With the success and fortune found by Casino Royale, Fleming purchased the small publication company Gildrose Publications, which had only published his novel. Gildrose, latered renamed Ian Fleming Publications in 1999 continues to license the Bond franchise to this day, and to expand the literary catalogue.

Gildrose had planned on having several authors use the pen name "Robert Markham" to continue to produce more Bond books but this idea was scrapped after just one work, Colonel Sun, was written by English author and Bond fan Kingsley Amis in 1968. Amis was already a highly respected novelist, by the time he came to Bond, but when he wrote a short story about an elderly Bond returning in a time of crisis, but was refused permission to publish it.

Gildrose produced two novelizations to the EON films, James Bond, The Spy Who Loved Me and James Bond and Moonraker in 1977 and 1979, respectively written by Christopher Wood.

After a thirteen year hiatus of original content (and recently after the death of Anne Charteris, Fleming's wife) Gildrose contracted John Gardner to come up with several new Bond novels and to bring Bond into the 1980s. In 1981 Licence Renewed was published to mediocre critical response and sales. Nevertheless Gardner wrote a total of sixteen Bond novels, including two novelizations of feature films. In 1996 Gardner published his last Bond book, COLD.

After Gardner's departure, Raymond Benson was contracted by Gildrose to continue the Bond story. Some fans accused Benson of Americanising the stories, but Benson also attempted to return to a more Flemingesque flavour than Gardner had provided.

Benson wrote six original Bond novels, starting with 1997's Zero Minus Ten. Benson's novels, like Gardner's, featured James Bond in a contemporary setting. He also wrote three film novelisations and three Bond short stories. In 2002, Benson left the Bond series. He is, to date, the only post-Fleming author to have had any Bond short stories published.

Ian Fleming Publications then asked British author Sebastian Faulks to pen a new Bond novel in the early 2000s. Faulks delivered a novel in 2008 entitled Devil May Care, which was set in the 1960s; this was a break from the contemporary settings which Gardner and Benson had attempted.

Faulks chose to not continue and was replaced with American author Jeffery Deaver who penned Carte Blanche in 2011 as a reboot of the character, returning to a modern setting.

In 2013 Ian Fleming Publications announced that William Boyd would write the thirty-eighth Bond book in time for the 60th literary anniversary. Solo was released in September 2013 in the UK and October 2013 in the US.

In 2014 it was announced that Anthony Horowitz would write the thirty-ninth Bond novel. He would be using previously unreleased material by Fleming as an inspiration. This would take the form of several plot treatments for a James Bond television series that was never made, many if which had previously been used as the basis of the short stories that formed the collections For Your Eyes Only and Octopussy and The Living Daylights. The book entitled Trigger Mortis was released in September 2015.

After a positive reaction to the novel, Horowitz was announced as writing a further Bond novel (also utilising material from Fleming) which released in 2018.[1] In February of that year it was announced that the new novel Forever and a Day would serve as a prequel to Casino Royale, adding to the list of authors writing period pieces to better fit into Fleming's world as opposed to bringing Bond forward into the modern era.

Entering the new decade, Ian Fleming Publications issued a message on social media about upcoming projects. They expressed a desire to bring new voices into the franchise with authors from varying backgrounds, and in 2021 it was announced that for the first time since 2008, a Spin-off series was to be produced alongside a third continuation novel by Horowitz. The spin-off series currently titled "Double O" is set to have three entries written by novelist Kim Sherwood. Horowitz however, has not confirmed interest or inspiration for a fourth title, leaving the main series' future uncertain for the time being.