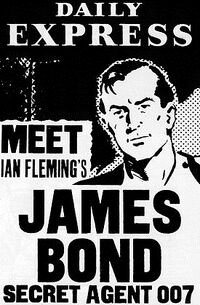 The Daily Express is a tabloid newspaper that began publication in 1900, with a Sunday edition under the name "The Sunday Express" was launched in 1918. In 1958, the paper began to run a comic strip based based on the James Bond property, written by Anthony Hern, Henry Gammidge, Peter O'Donnell and Jim Lawrence over the run of the series. The series was illustrated by John McLusky and Yaroslav Horak. Starting in 1958 and continuing to 1983, 007 appeared in 52 comic strips that were syndicated in British newspapers, 7 of which were published abroad.

In 1957 the Daily Express, a newspaper owned by Lord Beaverbrook, approached Ian Fleming to adapt his stories into comic strips. Ian Fleming at the time was reluctant to allow this because he felt the strips would lack the quality of his writing and could potentially hurt his series while he was still authoring them. Ian Fleming wrote:

"The Express are desperately anxious to turn James Bond into a strip cartoon. I have grave doubts about the desirability of this... Unless the standard of these books is maintained they will lose their point and I think there I am in grave danger that inflation will spoil not only the readership but also become something of a death-watch beetle inside the author. A tendency to write still further down might result. The author would see this happening, and disgust with the operation might creep in."

Regardless, Fleming later agreed and the first strip Casino Royale was published in 1958. The story was adapted by Anthony Hern who had previously serialized Diamonds Are Forever and From Russia with Love for the Daily Express. The illustrations of the strip were done by John McLusky who would later go on to illustrate 12 more James Bond comic strips with partner Henry Gammidge until 1966.

To aid the Daily Express in illustrating James Bond, Ian Fleming commissioned an artist to create a sketch of what he believed James Bond to look like. John McLusky, however, felt that Fleming's 007 looked too "outdated" and "pre-war" and thus changed Bond to give him a more masculine look.

The majority of the early strips were adapted by Henry Gammidge, however the adaptation of Dr. No was handled by Peter O'Donnell, a couple of years before he launched his legendary strip, Modesty Blaise.

In 1962 the Daily Express abruptly cancelled their agreement with Ian Fleming when a dispute between Lord Beaverbrook and Fleming erupted over the rights to the short story The Living Daylights. Fleming had sold the rights to the Sunday Times, a rival newspaper which upset Beaverbrook to the point of terminating his relationship with Fleming. The dispute caused the comic strip adaptation of Thunderball to come to an abrupt end. Thunderball was actually never finished; however, a few additional panels were later added for syndication in other newspapers to expand and conclude the story. Lord Beaverbrook and Ian Fleming would later work out their differences and the comic strip serial would continue in 1964 with On Her Majesty's Secret Service.

In 1966 Yaroslav Horak replaced John McLusky as the artist for the Daily Express comic strip series and adapted six more Ian Fleming James Bond novels and short stories as well as Kingsley Amis' Colonel Sun with partner Jim Lawrence. The Living Daylights was also republished in the Daily Express after first appearing in the first edition of the Sunday Times magazine on February 4, 1962 and in the American magazine Argosy in June of the same year under the title "Berlin Escape."

With the success of The Man with the Golden Gun Horak and Lawrence subsequently went on to write and illustrate twenty original James Bond comic strips for the Daily Express after being granted permission by Ian Fleming's Trust.

In 1977 the Daily Express discontinued their series of Bond comic strips, although Horak and Lawrence went on to write and illustrate several other James Bond adventures for syndication abroad in Europe, for the Sunday Express (the Sunday edition of the Daily Express), and the Daily Star. Additionally, John McLusky returned to team up with Jim Lawrence for five comic strips.

The 1983 strip Polestar was abruptly terminated by the Daily Star midway through its run and was not completed, although the complete story did appear in non-UK newspapers and was followed by several more complete serials before the James Bond comic strip officially came to an end.

Since first publication in the Daily Express, the comic strip adaptations have been reprinted several times. First by the James Bond 007 International Fan Club, in the early 1980s. Then annually, from 1987 to 1990, by the British Titan Books company in anthologies, beginning with The Living Daylights to tie-in with the release of the eponymous James Bond film.

Beginning in 2004, Titan reissued these anthologies in larger, revised editions, and also began reprinting stories that hadn't been featured in the earlier books. With a more frequent publishing schedule than the first series, to date seven books have been released with more scheduled. These volumes include new introductory chapters on the history of the strip and the Bond novels, and most of the books have also included special introductions written by Bond film actors, specifically Caroline Munro (The Spy Who Loved Me), George Lazenby (OHMSS), Shirley Eaton (Goldfinger), Eunice Gayson (Dr. No), Roger Moore (Casino Royale), Maud Adams (Octopussy) and Britt Ekland (Colonel Sun). Titan's comic strip reprints were not initially published in the strips' original publication order; this changed as of the release of the The Spy Who Loved Me volume.

The Harpies, included in The Spy Who Loved Me, is the first non-Fleming-based Bond comic strip to be reprinted as well as the first original story. River of Death, in the Colonel Sun collection, is the second original story to be published (Colonel Sun itself being an adaptation of the first post-Fleming Bond novel). The Golden Ghost, announced for an April 2006 release, is the first collection comprising all-original stories. By 2011 they had released each of the Daily Express strips in paperback form, and in 2015 they began to publish the strips based upon Fleming's work in large hardcover editions.