James Bond Wiki
Register
Don't have an account?
Sign In
Advertisement
in: James Bond characters, Film characters, A View To A Kill characters,
and 8 more
English

Jenny Flex was a fictional equestrian who served as an enforcer to the psychopathic industrialist, Max Zorin, and his mistress, May Day. A supporting antagonist and Bond girl portrayed by Irish actress, Alison Doody, the character first appeared in the 1985 James Bond film, A View to a Kill, and was subsequently adapted for the 1983-87 tabletop role-playing game, James Bond 007: Role-Playing In Her Majesty's Secret Service.

Jenny Flex is one of the henchwomen working alongside May Day (the other is Pan Ho). She is first seen walking down the stairs to greet James Bond (under the guise of James St. John Smythe) at Max Zorin's château. She then escorts Bond and his chauffeur Sir Godfrey Tibbett up to Bond's quarters.

Flex is next seen at the reception party at the chateau conversing with Pan Ho and other guests.

Later in the film, when Tibbett is going to get his car washed at the local BP garage so he can telephone M about 007's discoveries, Flex and Pan Ho provide a distraction by pretending to have engine trouble while Tibbett gets the car washed so May Day can murder him. She next is seen while Bond is being disposed of in the Rolls-Royce.

When General Gogol and his bodyguards Klotkoff and Venz confront Zorin, his henchmen, including Flex, May Day, Scarpine, and Pan Ho outgun them, forcing them to leave.

In San Francisco City Hall, when Zorin has murdered chief geologist W.G. Howe, Flex appears in the doorway with petrol canisters and begins to douse the carpeting so the building can be set aflame. After this, we see her walking out of the office with the canisters and then in the car looking at the destruction she's caused.

In the Main Strike mine sequence, Jenny is patrolling the grounds and hands Scarpine the tool which leads to her demise: the dynamite (disguised as a coffee thermos) to flood the fault. After that, she assists in positioning the detonator Zorin intends to use to create a double earthquake, which would be utilized to annihilate Silicon Valley. Then after Bond and Stacey Sutton are discovered, she chases them with May Day and Pan Ho. After being directed another way by May Day with Pan Ho, Zorin decides to flood the fault before the personnel are evacuated, despite Bob Conley's protests. While the carnage ensues, the film cuts to Jenny and Pan Ho, who are about to be washed away by the oncoming floodwaters. Their attempts to outrun the waters prove futile, and they both drown.

This betrayal caused May Day to turn to Bond for help, even mourning for the loss of Jenny after noticing her corpse floating on the water. May Day later avenges both Jenny and Pam by helping Bond to foil Zorin's scheme at the cost of her life. 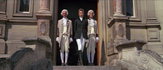 Flex before her ultimate fate 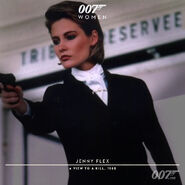