Jill Masterton is a fictional 'companion' of Auric Goldfinger and sister to Tilly Masterton. The character appears in the 1959 Ian Fleming novel Goldfinger and was subsequently adapted (and renamed Jill Masterson) for the 1964 EON Productions film of the same name.

In the novel, Jill plays a slightly larger part than her later film counterpart. While attempting to ascertain how Auric Goldfinger is cheating an old acquaintance (Junius Du Pont) out of money during a card game, James Bond investigates a room overlooking the men and discovers Jill Masterton - naked except for a black brassière and black silk briefs - feeding Goldfinger details of Du Pont's hand via radio. She is described as roughly five feet ten with an athletic, lightly sunburned body, pale blonde hair (which fell heavily to her shoulders, unfashionably long) and deep blue eyes.

Explaining Goldfinger's obsessive motivations, she reveals that she is Goldfinger's paid 'companion', paid one hundred pounds a week and kept in luxury. Bond talks with Goldfinger over the radio and threatens to expose his activities to the FBI and Scotland Yard, unless he writes Du Pont a cheque for fifty thousand dollars. Wanting to rescue the fearful Masterton from Goldfinger's employ, he also demanded the man bring Masterton as 'hostage' aboard the Silver Meteor to New York that evening (along with a bottle of vintage champagne and plenty of caviar sandwiches). She is delivered to the train as promised, by a seemingly relaxed and indifferent Goldfinger, who said he would expect the girl back by the next train. The pair make love to New York and she returns to Goldfinger, much to Bond's concern. At some point after her return, she was murdered by Goldfinger, when his associate Oddjob painted her entire body in gold paint, causing her to die from skin asphyxiation. Thrown out by Goldfinger and dying in an emergency ward in a hospital in Miami, she cabled her sister Tilly to come to her and she died later that night.

The bizarre nature of her death is explained as skin suffocation. Although attributed to have happened to cabaret dancers, the validity of actually dying from this method has been questioned. Bond does not learn of her death until he meets Tilly Masterton, Jill's sister, in Switzerland. The film's version of events allows Goldfinger to exact revenge quicker, and dramatically, Bond gets to discover the striking image of a woman covered in gold paint. 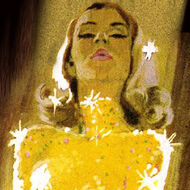 Retrieved from "https://jamesbond.fandom.com/wiki/Jill_Masterton_(Literary)?oldid=99735"
Community content is available under CC-BY-SA unless otherwise noted.