Giacinta 'Jinx' Johnson is an NSA operative who teams up with James Bond to spy on rogue North Korean agent Zao and investigate his ties with diamond magnate Gustav Graves. The character first appears in the 2002 film Die Another Day, portrayed by American actress Halle Berry. In 2012 Jinx made an appearance in the 2012 video-game 007 Legends with the likeness of Gabriela Montaraz (voiced by Madalena Alberto). 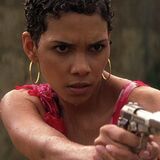 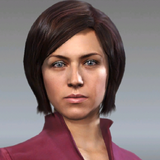