Giacinta 'Jinx' Johnson is a fictional NSA operative who teams up with James Bond to spy on rogue North Korean agent Zao and investigate his ties with diamond magnate Gustav Graves. She appears in the 2002 James Bond film Die Another Day and is portrayed by American actress Halle Berry.

An NSA Agent, Jinx is assigned to kill a rogue North Korean agent named Zao, who is undergoing gene-replacement therapy in 2002[1] at the Alvarez clinic on Los Organos island, Cuba. There she meets James Bond, who is also after Zao in the hope of extracting the identity of a double agent responsible for his 14 month imprisonment in North Korea.

Introducing herself as Jinx, a nickname derived from her being born on Friday the 13th, the two exchange double entendres and proceed back to Bond's room at the Hotel De Los Organos to have sex. The following morning she leaves the sleeping spy and crosses over to the clinic. Posing as a prospective patient, she kills Dr. Alvarez and accesses the clinic's records on Zao.

Suddenly her mission is interrupted by 007, who has found the North Korean first. After being pursued by Jinx and Bond, Zao escapes by helicopter, leaving the armed American agent surrounded by clinic security. Stripping to her bikini, she dives backwards off the edge of the wall into the ocean and is picked up by a boat.

Still pursuing Zao, Jinx tracks the agent to Gustav Graves' diamond mine in Iceland. Attending a public demonstration of the diamond magnate's Icarus Satellite at his Ice Palace, she once again crosses paths with Bond. Later that evening Jinx breaks into Graves' office and finds Zao 'sleeping' in a 'dream machine'. She tries to kill him but Graves stuns her before she can get the chance.

After being interrogated by Zao, the agent leaves her to be disposed of by Mr. Kil. Rather than shoot her, Kil insists on using the nearby industrial lasers. As the laser edges towards her head, she is rescued by 007 who intervenes and stops the machine - only to be jumped by Kil. As the henchman prepares to deliver the finishing blow Jinx grabs the swinging controls and activates the laser; cutting through the back of Mr. Kil's cranium.

After formally admitting that she is a member of the NSA, they team up and exchange information. It suddenly becomes clear to Bond that Zao is working with Graves, who is in reality an old North Korean adversary, Colonel Tan-Sun Moon. The pair split up, with Bond confronting Graves and Jinx heading to warn MI6 operative Miranda Frost. However, unbeknownst to Jinx, Frost is a double-agent working for Graves. Exchanging insults, Miranda locks her in Bond's suite and leaves her to die as Graves melts the Ice Palace using his satellite's heat-ray. Almost drowned in the flooding room, she is rescued for the second time by Bond, who shatters the door with his Aston Martin V12 Vanquish and takes her to a nearby hot pool to be revived.

During the chaos, Graves and Frost escape on his private airliner. On the orders of their respective Service Heads, Jinx and Bond infiltrate a North Korean airbase using switchblades and prepare to snipe Graves before he can take to the skies again. However, a passing truck ruins the shot and they are forced into boarding the plane via its landing gear. Again, the two split up with Jinx taking care of the pilot while James goes after Graves.

While Jinx manages to take over the controls, Bond accidentally shoots out a window in Grave's observation deck. She manages to keep the plane airborne but is suddenly ambushed by a sword-wielding Frost, who forces the spy to hand the controls over to the auto-pilot and escorts her out of the cockpit. However, the auto-pilot sends the plane hurtling into the solar beam of the now active Icarus, causing the plane to violently lurch and disintegrate. Frost is hurled to the ground by the impact, allowing Jinx to gain the upper hand. They engage in a violent sword fight culminating in Jinx plunging a knife into Frost's chest. Jinx and Bond then manage to escape the burning and demolishing plane in a helicopter, and make love with each other again.

The character of Jinx also made an appearance in the 2012 video-game 007 Legends alongside Daniel Craig (voiced by Timothy Watson) as James Bond. For the re-imagined Die Another Day mission, developer Eurocom took creative license with the character and used the likeness of Gabriela Montaraz (voiced by Madalena Alberto) rather than Halle Berry. Halle Berry did not reprise her role for the game.[2]

The scene where she emerges from the ocean in a bikini paid homage to the character of Honey Ryder (Ursula Andress) from the first Bond film, Dr. No. Lindy Hemming, costume designer on Die Another Day, had insisted that Berry wear a bikini and knife as an homage.[3] Berry has said of the scene: "It's splashy", "exciting", "sexy", "provocative" and "it will keep me still out there after winning an Oscar.".[4] Despite the bikini and location of Cuba in the film, the footage was shot in Cadiz, Spain. Far from the warmth implied in the film, the location was reportedly very cold and windy, and footage has been released of Berry wrapped in thick towels in between takes to avoid catching a chill.[5]

During the subsequent filming of Zao's escape by helicopter, Berry was injured by flying debris from a smoke grenade. The debris was removed from her left eye in a 30-minute operation and the actress returned to the set with an inflamed cornea.[6]

In discussing her character, Berry said Jinx is "fashion-forward modern and the next step in the evolution of women in the Bond movies."[7]

Speculation arose in 2003 of a spin-off film concentrating on the character which was scheduled for a November/December 2004 release. It was originally reported that MGM was keen to set up a franchise and to be a "winter olympics" alternative to 'James Bond,'. As early as the late 1990s, MGM had originally considered developing a spin-off film based on Michelle Yeoh's character, Wai Lin, in 1997's Tomorrow Never Dies. However, despite much speculation of an imminent movie, on October 26, 2003, Variety reported that MGM had completely pulled the plug on this project, to the dismay of Barbara Broccoli and Michael Wilson of EON Productions, who were reported to be "clearly furious" about the decision.[8] MGM were keen to move on with the next film instead. 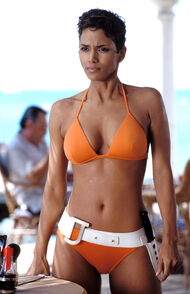 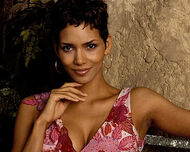 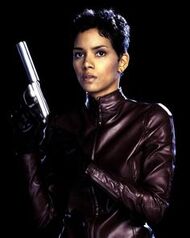 Jinx and Bond
Add a photo to this gallery

Retrieved from "https://jamesbond.fandom.com/wiki/Jinx_(Halle_Berry)?oldid=98465"
Community content is available under CC-BY-SA unless otherwise noted.