Professor Butcher is an American televangelist who operates the Olympatec Meditation Institute in the Republic of Isthmus; a front organization for drug lord Franz Sanchez's illicit operations. Originally started by Sanchez merely as a cover, he later notes that Professor Joe manages to turn a 'tidy profit' from it.

Butcher's methods would be transmitting messages from Sanchez to his international distributors by code. He would appear on TV asking for donations and announcing a goal. In actuality, the "goal" was Sanchez's asking price for a kilogram of cocaine. The middlemen would respond with an amount signalling how many kilograms they wanted. If one distributor wanted 500 kilograms, Butcher would say that a branch "just sent in $500". It is unknown how Butcher discriminated drug orders from those who legitimately donated to the Meditiation Institute, but he clearly has some method as Sanchez remarked Butcher has had the institute make money even without Sanchez's backing.

During the course of the film, James Bond learns that Sanchez's scheme involves dissolving cocaine in petrol and then selling it to Asian drug dealers (disguised as fuel). The buying and selling are conducted via Butcher. The re-integration process will be available to those underworld clients who can pay Sanchez's price.

After some brief television appearances, Prof. Butcher is seen again as Sanchez takes Bond to his base of operations under the meditation retreat. Out of concern for Bond's safety, Pam Bouvier is also attempting to infiltrate the site and personally approaches Professor Joe. Posing as an eager young fan with a bag full of cash, Bouvier is led to Butcher's 'private meditation chamber' and an attempt is made to seduce her. After declaring that she has another surprise for him, he finds himself staring down the barrel of a Beretta Jetfire. She demands the keys and leaves.

The meditation retreat is subsequently destroyed after Bond starts a fire in the laboratory and Butcher is seen fleeing from the building on foot with Bouvier's bag of cash. Driving past him in a golf buggy, Bouvier snatches the bag from the exhausted televangelist and drives off in pursuit of Sanchez. He was last scene saying "Bless Your Heart." to Pam Bouvier. It is unknown he was arrested after that or managed to go into hiding.

License to Kill was one of the few films that did not deal with conspiracies such as SPECTRE or having Cold War themes like the previous three Bond films. Many fans consider it to look at the social problems of the 1980s. While drug abuse was the most prominent, being seen in the main antagonist, other problems were seen in Sanchez's underlings. Colonel Heller had teamed up with Sanchez to avoid being court-martialled by the US military after he was supplying various guerrilla forces in Central America while making shady deals with Islamic terrorists, a reference to the Iran-Contra affair. Truman-Lodge was a whiz with the numbers who became Sanchez's accountant after fleeing charges of insider trading in the United States, a reference to the fast buck culture of Wall Street and the crash that came a few years earlier. Joe Butcher himself represented the televangelist scandals.

Professor Joe Butcher wears a necklace with a gold cone, and poster with a rainbow-colored cone reading "Cone Power" suggests he endorses a multi-level mysticism. It is likely meant to parody pyramidology, in particular the New Age movement which was popular at the time, of whom pyramids were of great importance. 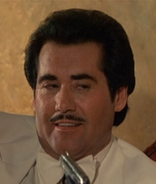