John Glen (born 15 May 1932) is an English film director and editor best known for directing For Your Eyes Only, Octopussy, A View to a Kill, The Living Daylights, and Licence to Kill. Before that, he worked as a second unit director on several Bond films.

John Glen was born and raised in Sunbury-on-Thames, England. In 1945, Glen joined the Sea Cadets, and met a messenger boy at a local film studio. He mentioned that he was moving into a different department and that there would be a vacancy. There, he landed the job as a messenger at Nettlefold studio.[1] Although he was referred to the Shepperton Studios, Glen participated in tasks in the editing room, and learned to assemble footage for the editors' perusal and splicing and sorting reels of film.[2]

In 1949, his first work on a film set was on The Third Man, which starred future Bond actor Bernard Lee and Orson Welles, where he was an assistant to the sound department on location.[2] Glen would later work on Three Men in a Boat, The Scamp, and The Admirable Crichton (directed and co-written by Lewis Gilbert), where he became good friends with Peter R. Hunt.[1]

Throughout most of the 1960s, Glen worked on notable television shows such as Danger Man and Man in a Suitcase, where he was promoted to supervising editor. Glen would later to return films where he worked as a sound editor on The Italian Job. During his work on The Italian Job, he received a telephone call from Peter R. Hunt, filming On Her Majesty's Secret Service at the time, who offered him the position of second unit director.[2] Glen took up the role, as well as served as the film editor.

After On Her Majesty's Secret Service was released, production on Diamonds Are Forever was commissioned, and director Guy Hamilton was brought in. Hamilton brought in his own editor, and disliked using a second unit director.[1] Because of this, Glen returned to editing non-Bond movies until Lewis Gilbert, who was filming Seven Nights in Japan, informed him that Cubby Broccoli had offered him a chance to work on The Spy Who Loved Me. Glen reclaimed his former position, and later worked on Moonraker.

Following several lunch meetings to discuss For Your Eyes Only, Broccoli offered Glen to direct the picture. The new transition resulted in a harder-edged directorial style, with less emphasis on gadgetry and large action sequences in huge arenas.[3] He later directed the most consecutive number of Bond movies in the series by the time he ended his run with Licence To Kill. After the mixed reception of Licence to Kill, Glen stepped down, and later directed Aces: Iron Eagle III, and Columbus: The Discovery in 1992.[1] In 2001, after directing The Point Men (with former Bond girl Maryam d'Abo in a minor role), Glen retired.

Glen's films each have an individual trademark in the form of a startled pigeon making the actor (and the audience) jump.[4] These are noticeable in his five James Bond films. There are variations; in some instances, the startled animal is a cat (A View to a Kill) or a monkey (The Living Daylights). As editor of Moonraker, Glen was responsible for creating the "double-taking pigeon", an editing trick that makes it appear that a bird in St Mark's Square in Venice, Italy cannot believe its eyes as James Bond's gondola transforms into a hovercraft. Glen's Bond films also all feature a character who falls to his death from a height, often accompanied by the same "male scream" sound effect. 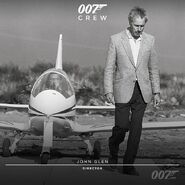 Retrieved from "https://jamesbond.fandom.com/wiki/John_Glen?oldid=75501"
Community content is available under CC-BY-SA unless otherwise noted.