"You have a nasty habit of surviving."
― Kamal Khan to Bond.[src]

Kamal Khan was a fictional exiled Afghan prince and one of the two main antagonists in EON Productions' 1983 James Bond film Octopussy. He was portrayed by the late French actor Louis Jourdan. The character also appeared in the 1986 James Bond 007 tabletop role-playing game.

Kamal Khan is a suave exiled Afghan prince living in India in the Monsoon Palace. He has a penchant for fine food and liquor, priceless jewels, and atomic weaponry. Kahn also operates a sports club for tennis, polo, cricket and game hunting. Station I agent, Vijay, works undercover there as a tennis pro. Kahn associates himself with the power-crazed General Orlov in an attempt to unleash nuclear holocaust in Western Europe.

To finance this, the pair enter a scheme to generate funds by selling fake jewelry including a Fabergé egg. They then plan to detonate a nuclear bomb inside a US airbase in West Germany, using his mistress Octopussy's traveling circus as a cover. Octopussy is unaware of this, thinking she smuggles jewelry to Zurich to share the profit with Orlov and Khan. The pair instead plan to replace the jewelry with the bomb. The following detonation would be labeled as an "accident", as the Air Force's early warning systems would have no evidence of a Russian nuclear missile start. This will encourage NATO to abandon nuclear arms and allow Orlov's armies to invade western Europe. When the plan goes afoul, Khan, leaving both his employer and Octopussy to die in the nuclear blast and returns to India.

After Khan and Gobinda escape, they attempt to steal the goods of Octopussy's palace. Surprised when Octopussy shows up alive, He and Gobinda kidnap her and climb aboard Khan's plane. James Bond jumps onto the outside of the plane and defeats Gobinda in hand-to-hand combat while Khan makes the plane do dangerous flips and turns. Bond detaches the fuel line causing the plane to nosedive, leaping off with Octopussy just as Khan desperately tries to land. The runway is too short and the plane ends up going over a cliff. It later crashes and explodes, killing Khan.

Born in Marseilles to an extremely wealthy Indian merchant and a French mother, the young Kamal is described as being an extremely dissatisfied boy. At age nine, he robbed a sidewalk merchant at knife-point, performed at high noon of a busy Thursday in the center of Marseilles. True to his brilliant criminal nature, Khan chose not to follow up his initial success until the age of twelve, where he engineered a successful plan to steal valuables from a cruise boat. The following year, his father bought into a trading company in Calcutta, and under the pretense of joining his father in business, Kamal used the opportunity to enhance his criminal career by using the business as a smuggling pipeline throughout the Indian Ocean and Southeast Asia. His father eventually grew suspicious and confronted Kamal; whereupon the elder Khan and his business partner (the father of Vijay) were murdered and framed for the smuggling operation.

Since that time, Kamal's rise to prominence in both the legitimate and illegal worlds has been steady and unrelenting. For 25 years Kamal has been a successful businessman in various parts of India, particularly in Bombay, Calcutta, Delhi, and lately Udaipur, where he maintains a fine home. He has many connections in the legitimate jewelry business and gambling institutions throughout India; the latter of which have netted him a significant profit. Khan maintains an intimate series of connections with the Udiapur and Delhi underworld, which provide him with extensive involvement with the KGB through which he met his business partner, General Orlov.

Fluent in French, English, Spanish, Italian, Russian, and any of the languages of India, he is a described as a gentleman, trained and fully practiced in the manners and customs of many areas of the world. The character dresses in the finest tailored clothes, smokes Turkish cigarettes, and carries with him a walking stick made of ivory (naturally a disguised weapon) - not for walking, but for the 'courtier-like image' it provides him. In addition, he is a superb golfer, and a competitive yachtsman.

"General, excuse me. I have some traveling arrangements to make. Enjoy the show. (US general : Thank you.) (US aide : I'm sure the general will get a big blast out of this) I know he won't be disappointed."
― Kamal Khan preparing to leave the circus, where a bomb is placed.[src] 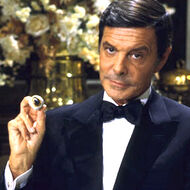 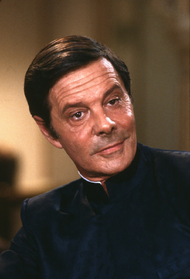 Retrieved from "https://jamesbond.fandom.com/wiki/Kamal_Khan?oldid=95717"
Community content is available under CC-BY-SA unless otherwise noted.